Not too common but can be found in quite large numbers. A delicious wintertime mushroom, most often found growing with beech or birch and quite often in mossy areas. They do also appear in evergreen forests.

An easy to identify and delicious mushroom, related to the famous Girolle.

When young they are convex with a slight depression towards the centre, becoming more funnel-shaped with age. The central depression often runs down into the hollow stem.

Yellow, hollow quite often ‘split’ in two. Almost cylindrical but irregular in shape. 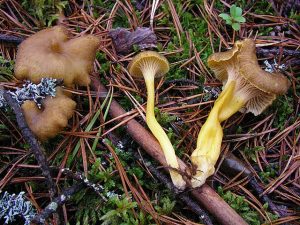 Does not have true gills, they are more like folds or ridges. The gill like ridges run partway down the stem and are pale yellow in colour, branched and shallow/ridges/folds.

A true gourmet mushroom, they work well in any dish. They work particularly well in pasta dishes.

Only take the larger specimens and leave the smaller ones to grow, they are an occasional find but do often appear in large groups.

The Jelly Baby (Leotia Lubrica) looks similar but lacks any gills and isn’t trumpet-shaped, it’s more like a ‘blob’ on a stem.
Other chanterelles but these are all edible.