Channel Wrack / All Year Round / Edible

Brown seaweed with a dark, wiry stem opening out into a handful of fronds, each roughly 5-15cm long.

The fronds form swollen V-shaped tips that are much lighter in colour, approaching yellow.

The fronds each have a distinct channel in them caused by curling of the edges, hence the name.

This wrack lacks a midrib and bladders containing air. 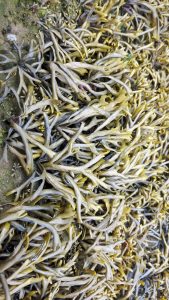 Channel wrack is one of the first wracks that you tend to find as you move from land to water. It likes to be firmly within the splash zone, and can blanket large areas of rock. It is found around the rockier shores of Britain, such as west Wales, Scotland, and is widely found on the west coasts of Ireland and France.

This is a very abundant seaweed that tolerates desiccation well.

Never strip an entire patch, and only take the tips, leaving the rest of the algae to complete its life cycle.

Best harvested between May and August.

Cutaway only the softer tips; nearer to the holdfast they get wiry and tough.

They are available all year round, so it becomes a matter of preference whether you are happy to pick winter wracks.

Around August – September the seaweed’s gametes are released from the frond tips into the water for external fertilisation.

Channel wrack is distinguishable from the abundant other kinds of wrack by its presence in the splash zone at high tide, and the elongated bladders at the frond ends that turn yellow and are therefore distinctive from a distance.

It is also slightly smaller than other wracks. All the wracks are edible, and there are no seaweeds currently found on the coasts of Britain that are toxic.

The juicy tips of channel wrack make good additions to salads, stir fries, sandwiches, quiches, pies and soups. A common use is as a thickening, flavouring agent for broths and stews, to which channel wrack lends its savoury, umami flavour. Dehydrate the seaweed before grinding into a powder, or toast under a grill for a delicious snack.

The brown wrack seaweeds are high in iodine and have historically been used for goitre. These are brilliant tonic foods and should be eaten in moderation on a regular basis to ensure optimal nutrition.

This wrack can die if exposed to water for too long, although it needs submersion to obtain nutrients. It grows more slowly than other wracks that live further down the shore, meaning it is outcompeted closer to the water.

Laver / All Year Round / Edible Other Common Names: Nori (but not the varieties found in Britain) La…