Kelp refers to a group of brown seaweeds that have a very sturdy, handlike holdfast, a long stipe (stalk), long fronds and a tendency to grow in dense clumps that look like underground forests in the right conditions. Thus, there are several common names that fall under the umbrella term ‘kelp’.

Large, brown seaweeds with a holdfast, solid stipe, and a hand of several long, smooth fronds that can be well over a metre long. Some fronds develop bladders full of air to help them float in the currents. 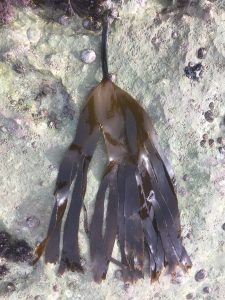 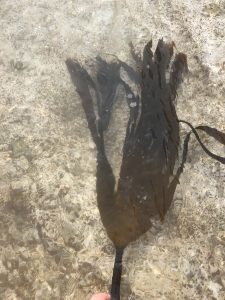 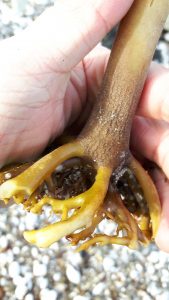 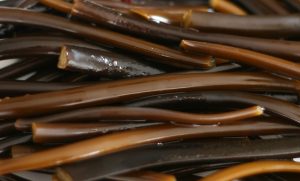 Britain has one of the widest variety of kelps in Europe due to its abundant coastline and varying habitats. Kelps like to holdfast to solid rocky seabed, and need a fair amount of light, so tend to live in the shallows. If the conditions are right, they will form large clusters often called kelp forests.

Kelp forests are important physical features of the seabed because they can attenuate the strength of waves reaching the shore. They are therefore important systems to conserve as the climate changes and weather systems become more extreme, but are unfortunately quite intolerant to changes in water temperature.

Only harvest the fronds if you have found some still attached, or else take what has been washed up very recently so that it is still fresh.

All kelps like oarweed and forest kelp can be used in a similar way, and no seaweed species that grows on the shores of Britain are currently toxic. This may change with shifting climate patterns.

This is a very versatile group of seaweeds, with their large surface area and crunchy texture making them a perfect addition to or substitution for lasagne sheets. They can be incorporated into pies, fries, quiches and bakes. The fronds are also very tasty after battering in a light batter such as gram flour, or crisping under the grill with some olive oil and pepper. You could also dry and powder kelp to make a soup thickening and flavouring agent.

Like all seaweeds, kelps are high in iodine and many other essential minerals and vitamins. These compounds are essential for good long term metabolic function, which supports the health of every system in the body. Consume in moderation, and consult a healthcare practitioner if you increase your seaweed intake while taking thyroid medication.