Truffle of the Sea

This seaweed is one of the easiest to get mixed up with other red/brown seaweeds that also branch and share the same boulders. These are mainly Irish Moss (much bigger and coarser than Pepper Dulse) and various small tufted seaweeds (much finer). I have often found large clumps of Pepper Dulse growing underneath channel and serrated wracks, so do have a look under large clumps. Always cut the Pepper Dulse away from its holdfast, to allow the seaweed to regenerate and to avoid sand and rock in your batch. Aim for the two hours around low tide to give yourself the best chance of finding some.

Pepper Dulse likes rocky shores a little further towards the water than the wracks, but not as far as the kelps, and the best place to look is on boulders with lots of nooks and crannies.

Widely distributed around the coast of Britain and the north-western coasts of France, Spain and eastern Europe.

This is a very common seaweed on Britain’s rocky coasts. Harvest with care, never clearing a single patch, and always leave the holdfast so that the seaweed can regenerate.

This seaweed looks quite like a fern, with fleshy, flattened, branched fronds that usually have an overall triangular shape. The size can vary greatly, with those furthest from the water being greenish in colour, and those further towards the water being reddish brown. It is considered a red seaweed despite its ambiguity in colour. It grows in clumps, and will often be among many similar looking species, so really practice identifying this one! 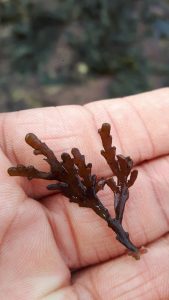 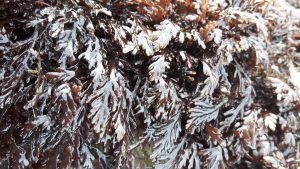 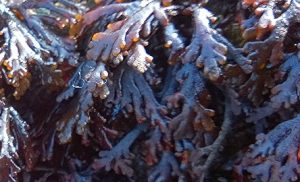 Irish Moss and several other species such as Syphon Weeds can appear similar, but are much coarser and finer, respectively. It’s a process of learning to recognise patterns, like a language of form, and comparing something you are certain of with something you are not certain of is a great way to practice.

Apparently called ‘Truffle of the sea’ in some culinary circles, this seaweed always receives the widest eyes and most surprised grins on our coastal foraging walks.

It’s flavour is difficult to fathom coming from a tiny red sea plant, but tastes like a sea pig were made into smoked chorizo.

Definitely, one to use as a spice rather than a bulk ingredient – a little goes a long way. The red seaweeds are particularly high in protein per gram, and also contain high levels of (naturally occurring) sodium monoglutamate, giving the delicious meaty, umami flavour.

It retains the flavour when cooked or dried (although it does taste best fresh) and made into a spice – a great addition to your table salt and pepper.

Get to know the flavour and experiment! Savoury biscuits, crackers, breads, pastries and sauces are definitely recommended. You could also beat it into a special batch of butter, or make a range of flavoured salts with other foraged ingredients too.

Full of minerals, this seaweed is a wonderful tonic spice for regular use. It also contains high levels of iodine which is essential for good overall metabolic health.