Luc.T from Buggenhout, België, CC BY 2.0

How to Identify Sea Buckthorn

The Latin Hippo meaning horse and phaos meaning to shine has been given to sea buckthorn as it was observed that horses that ate the leaves of sea buckthorn gained weight more easily and developed a lovely shiny coat. Rhamnoides meaning buckthorn like.

Sea Buckthorn berries can sometimes act as a blood thinner and you should avoid consuming them if you are taking other blood thinning drugs, as it will increase your likelihood of continued bleeding if you sustain a cut. The hairs of the tent moth caterpillar that sometimes live on this plant can also cause skin irritation.

Could be confused with…

Other plants in the Hippophae, which are commonly also named sea buckthorn – all can be used similarly.

Orange-coloured berry Pyracantha species, many and varied differences, this plant is not a wild plant and may be found in urban areas and gardens. The leaf shape is more widely oval whereas Sea Buckthorn is thin and narrow.

Ornamental orange varieties of Cotoneaster, could be more easily confused with the pyracantha than sea buckthorn. It’s also almost solely a garden and ornamental plant.

Due to the sharp thorns that protect the berries, it is difficult to harvest enough to be extractive. Nevertheless, exercise the usual respect for the rest of the ecosystem that relies on this plant. They are widely distributed and are not endangered.

The insect species Hope and Blanchard have been reported as causing great devastation to sea buckthorn foliage and root systems. Cocoons of the brown-tailed moth can commonly be found on this plant, and its berry also provides an instant welcome to migrating birds passing over coasts where this plant is found.

Commonly found growing on sharp banks, on the coast, by the sea, and a very close relative is also found growing in the Himalayas. Sometimes planted as a hedging plant.

Sea Buckthorn is a dioecious shrub or small tree growing from 2-4ms tall and its branches are very stiff and thorny all over.

The leaves, 7-8cms long and 5-7mms wide, grow alternate or opposite, they’re distinctly pale green with a silvery glimmer, more noticeable on the underside. 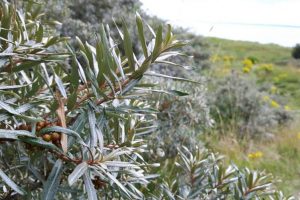 The male and female flowers appear on separate plants. The male is built up of four to six brown flowers without petals. 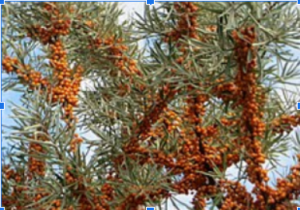 The root system is complex and extremely developed making it a suitable plant for holding sand banks together, aiding to lessen the effects of erosion by the sea.

Folklore states that Sea Buckthorn was the favorite food of Pegasus (the mythological flying horse) due to the fact it would produce an amazing glossy coat of hair, so Sea Buckthorn really does give you wings!

The classic Tibetan medical text – Sibu Yidian, written in the Eighth Century – devotes thirty chapters to the medicinal and nutritional uses of Sea Buckthorn (to tonify Yin and strengthen Yang).

Weight for weight, Sea Buckthorn contains over 10 times as much vitamin C as oranges.

The seeds, flowers, bark, and leaves are used in decoctions to aid many ailments from treating acne and bedsores, to blood pressure.

Sea Buckthorn’s high antioxidant content and intense pigmentation mean that it was used as a convalescence, debility and infection remedy. Today, capsules containing the juice are often given for skin issues and low energy.

Sea Buckthorn is great for fixing nitrogen in the soil and also works well at turning compost into soil – which is how it’s commonly used in Canada.

The berry of this plant makes an incredible orange pigment when mixed with chalk, the colour appears to be fairly light fast and sits nicely within a water colour. The berry can also be used as a yellow/orange dye and is often used for colouring foodstuffs and cosmetics.

Sea Buckthorn is not suitable for paper making alone, but mixing the berries with other pulps gives the paper with lovely orange, flexible and glossy finish – making the paper particularly suitable for embossing.

When collecting the berry juice from this plant here’s what we do: we first put on plastic gloves, like marigolds (to stop your hands getting really cold from the juice), and then a pair of thick rigger gloves (to stop the thorns from piercing your skin). You then place a bucket or container beneath the plant you’re extracting juice from, grab the branch and squeeze the berries all the way down, no need to remove the berries from the branch and squeeze them later, do it all on-site – it’s quicker. Then sieve this whole mixture to remove and leaves that might have fallen in. Boil this mixture before storage for pasteurisation.