The name derives from Galerina meaning helmet-like and Marginata meaning bordered in reference to the generally lighter margin edge when compared to the cap centre.

Velvet shanks (velvet shanks have a velvety stem and lack the skirt), Wood tufts (Very similar in appearance making the wood tuft unsafe to forage for)

Fairly common in the UK.

These mushrooms contain the same toxins as Death caps so are potential deadly, therefore it’s a good mushroom to learn and avoid.

Caps are 1- 8 cm across and generally have a central umbo or nipple, with age the caps expand and almost flatten out. The caps and orange-brown to yellow-brown, generally lighter towards the edge. 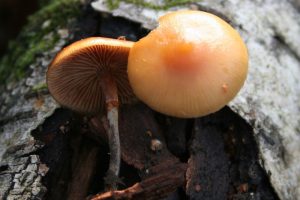 The gills are crowded, attached and are pale brown to yellow-brown in colour.

Stems are 2-8 cm in length, lighter at the top and almost black at the base. The stems have a small ring towards the top but this may be nonexistent in older specimens.

They are found on rotting logs and woodchip either evergreen or broadleaved species.

This is a seriously toxic mushroom and should not be consumed.

Mushrooms are in abundance at the moment. Any walk through a green space or forest  will have you tr…