They are a parasitic species and cause brown rot that degrades the cellulose in trees. Fairly common throughout the UK growing on conifers such as Pine, Spruce and Larch.

A large bracket fungus that grows in overlapping tiers at the bases of trees. They are classed as inedible, they may contain toxins but their avoided really because of their bitter taste and tough texture. They can be used for creating natural dyes.

They don’t have a regular cap or gills, the fruit body starts as a small globular, bright yellow lump. As they age they become more fan or shelf like and darken in colour but at their growing edge they will still be yellow and soft. The tops are concentrically grooved and are covered in velvety hairs. The underside is covered in tiny irregular, pores that look a little like a maze hence Mazegill. The pores are yellow but will darken when damaged. The main growing period is in summer and autumn but they do survive all year round often turning black in winter.

They have a short, thick, dark stem.

That debate is still out about whether this is a toxic species, so it’s not one that we would recommend, even if it is non-toxic it’s bitter and has a tough texture so at best it’s not worthwhile.

It could be confused with other Polypore’s but the velvety texture of the Dyers Mazegill is a good ID feature, the most similar looking fungus is the Chicken of the Woods (Laetiporus sulphureus) it’s a similar colour but has a softer texture and it’s mostly found on Beech and Oak trees. (The only conifer it grows on is Yew)

The common name Dyer’s Mazegill comes from its historic use in dyeing yarn. Various shades of yellow, orange and brown can be obtained, depending on the age of the fruit body and the type of metal used as a mordant to bind the dye to the fabric. 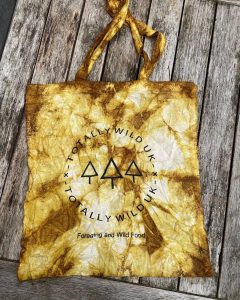 The name is schweinitzii is in honour of the American mycologist Lewis David von Schweinitz (1780-1834), who is considered to be the father of mycology in the USA.