This fungus is common across Europe, Scandinavia and Russia and is also recorded in Turkey and Iran. A similar species, Meripilus Sumstinei, grows in North America.

This fungus grows around the bases or broadleaved trees such as Beech or Oak, or much more rarely on conifers. It forms clusters on trunks or branches, or sometimes on the ground nearby where it springs up from the roots of the tree. It can keep feeding on dead wood above and below the ground after the tree has died, so you might see it on or near stumps or even appearing to grow straight from the ground – when there is a stump or log just under the ground.

This fungus grows clusters with big rounded fan shaped lobes.
when on the ground it can form rosettes, almost like a big brown cabbage.

The individual lobes or brackets can be 10-30cm across, and 1-3 cm thick, firm but flexible with softly rounded edges.

The colour can vary a lot ranging from creamy buff to brown in colour, typically cream at edges and with bands of lighter and darker brown towards the base of the bracket. They look fairly smooth, but if you look closely you could see small scales.  The underside is cream and covered in tiny holes or pores that release cream coloured spores as they mature. The flesh is creamy white, and firm.

The key identifying feature is the way they quickly bruise black when cut or squeezed.

The whole fruiting body is edible, mild-tasting, and has a firm fibrous texture a bit like chicken. It’s best when picked young and tender, as it can get tough as it matures. The black staining could look a little off-putting, but if you can get past that it works well as a vegan chicken substitute in curry, pies, casserole or stir fry

As with real chicken, make sure to cook it thoroughly to avoid stomach upsets.

Dried this mushroom can work well for making stocks

None known. One paper has been published showing an extract from the fungus had some effect on a particular kind of cancer in mice, but as yet this hasn’t been developed into use for humans.

Like with any wild mushroom it is possible to be allergic to it or have some tummy trouble if it is undercooked. To reduce the chances of a bad time try a small amount first if you haven’t had it before, and cook thoroughly.

Look out for it from July to November

Could be Confused With

Chicken of the Woods (laetiporus sulphureus) has a similar shape especially when young, but shows much brighter yellow and orange colours and doesn’t bruise black like Giant Polypore. 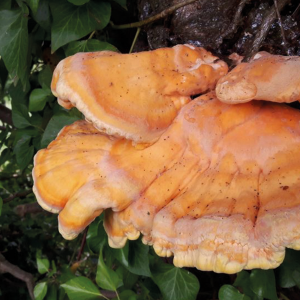 Hen of the woods (grifola frondosa) has much smaller brackets that are divided into frills rather than big rounded brackets. It is typically a greyer shade and again, does not bruise black. 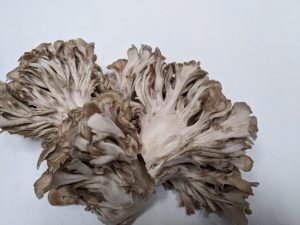 Both of these potential lookalikes are edible

True to its name, this fungus can grow really impressively large clusters of fruiting bodies! they get quite tough and bitter tasting quickly as they mature, so it’s best to get it young. If you find a big one past its best though don’t despair, remember where you saw it and check again the next year.

Identify Hen of the Woods Mushroom