From the ancient Greek words kalos “pretty” and cubos “head”, and the Latin gambosus, meaning “club footed”. The species name is a reference to the often one-sided bulbousness of the stem base

The Deadly Fibrecap (Inocybe erubescens), but the gills of this bruise red and it does not smell mealy

The larvae of several species of fly

Grassland, the edge of woodland, hedgerows

The cap grows to 5-15cm and often turns buff with age. 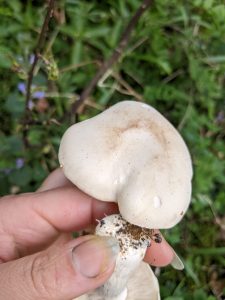 The stem is solid and more bulbous towards the base, white throughout and between 1 – 8cm. It has no ring on the stem and is often found growing in rings. It can be found growing in tight clusters and partial rings. 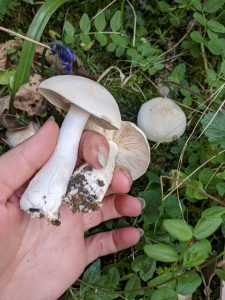 The gills are very narrow compared and crowded. 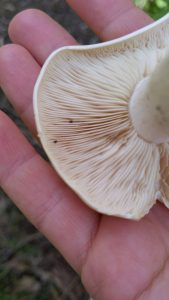 The mushroom has a strong mealy/wet dough scent.

This mushroom fruits a few weeks before to a few weeks after St George’s Day, 23 April; thus its common name

One of the few mushrooms that can be eaten raw. St George’s Mushrooms can also be pickled. However, the most popular method to eat them is fried in butter. Cooking can remove some of the mealy odour/flavour. Also a good mushroom for dehydrating, as well as using in stocks

Some evidence of antifungal properties is being researched currently.
If you have a medical complaint, please see your doctor