Jelly Ear Mushrooms are a delightful edible mushroom and although they can be found all year, early spring is when they’re most prolific.

Auricularia and auricula are both derived from the Latin word for “ear”. Judae means Judas, the disciple who is named as betraying Jesus Christ in the Christian Bible – see folklore.

Should be avoided by those with haemophilia or taking blood thinners

Uncertain, but the fungus is virtually always free of maggots

On dead or dying broadleaf wood, in particular, Elder

Brown and very much resembling a human ear in look and texture. Its cup hangs down towards the ground. In dry weather, it shrivels to a fraction of its hydrate size and becomes almost black. It rehydrates after rain. 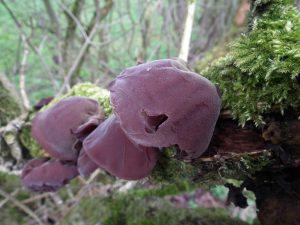 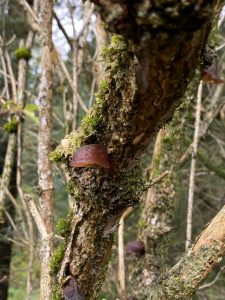 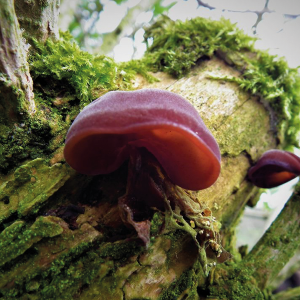 There is a belief that Judas Iscariot hung himself on an elder after betraying Jesus Christ. The ears are a sign of his tormented spirit being trapped in the tree. However, the elder is a very weak tree and unable to support the weight of a human adult

Jell Ear’s ability to dehydrate and rehydrate means it is excellent for long-term storage. It can be rehydrated in strong-flavoured sauces and will take up those flavours. Its texture lends itself towards oriental cuisine, however, soaked in strong fruit juice and covered in chocolate, it makes an interesting confectionery.

Avoid frying in oil as it will explode!

Here’s a link to some nice wood ear mushroom recipes

An acidic polysaccharide (containing mannose, glucose, glucuronic acid and xylose) within the mushroom has been found to have some effect on reducing blood coagulation. Research is continuing into its use as an antithrombotic

This Wild Mushroom risotto recipe is full flavoured, creamy and delicious. The best thing about this…