Hey are mycorrhizal and are most often found beneath deciduous trees, occasionally near conifers.

A fairly common and potentially deadly mushroom. They are quite often mistaken for edible members of the Agaricus family.

Conical when young they flatten out with age.  They are almost pure white in colour and have a raised umbo in the centre. They can get slightly darker as they age. The caps are covered in silky radial fibres and they tend to split along their margins as they get older.

A similar colour to the caps, they are silky and fibrous.

The gills are cream coloured when young, darkening with age, fairly crowded and adnexed.

This is one of the most hazardous mushrooms in the UK and is often mistaken for edible species. They contain potentially lethal amounts of muscarine. Although death in a healthy adult is rare symptoms of poisoning can include excessive salivation, abdominal pains, sickness and diarrhoea, together with blurred vision and laboured breathing.

There is a variant of White Fibre Cap called the Lilac Fibre Cap (Inocybe Geophylla var. lilacina) which is very similar looking but as the name suggest is lilac/purple in colour.

They have been confused with Field Mushrooms (Agaricus campestris) with terrible results but Field mushrooms are larger, have a ring on the stem and doesn’t have a silky cap. 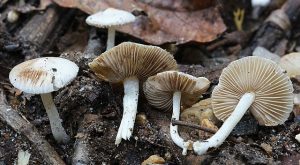 Let’s start with the facts: Magic Mushrooms are illegal and have been since 2005 they are deem…