While it is colloquially known as a moss, this is actually a lichen, which is a symbiont of at least one fungus and one alga, but researchers keep finding more partners. It looks quite mossy, but mosses are often much wetter than lichens. Reindeer moss looks like a tiny forest of pale green reindeer antlers that grow in tufts. It tends to grow to about 8cm high. 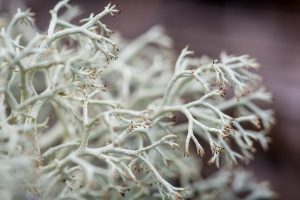 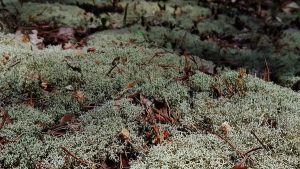 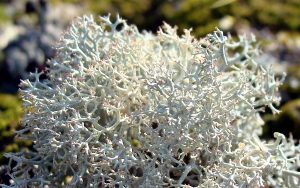 Abundant in the Arctic regions, so in the UK only to be found in the high altitude and northerly regions where it gets properly cold. It can be found on heathland.

Consider whether you really need to harvest lichen. Ideally choose not to unless it is enormously abundant. This lichen grows 3 to 11 mm each year, meaning that what can be harvested in a couple of seconds may have taken a decade to form. In habitats where Reindeer live, this lichen forms a major part of their diet.

Available throughout the year. Spring and Autumn are the times of highest growth due to the higher humidity – this is part fungus afterall! It is best to take the tops off of clumps, leaving the lichen base to regenerate.

Other Cladonia species can be quite similar, but are not toxic. There are relatively few truly poisonous lichens that cannot be made safe by proper preparation (see below), and the two genuses known to be high in the toxic vulpinic and usnic acids are yellow. Do not eat any yellow lichen. Also consider the pollution load the lichens you harvest may hold, particularly if you are foraging in a relatively urban area.

Prepare [any] lichens before eating. They contain acids (which help them live off rock and wood) which can cause gastric upset.

Don’t be too put off by this – lichens have been used as food and medicine as long as there have been people. It’s just necessary to do the proper preparation. This involves either steeping the lichen in several batches of water (discard the water after each soak) – adding bicarbonate of soda helps to leach acids because it is alkaline – or simmering the lichen for 15 minutes, discarding the water and repeating.

Being quite tough and fibrous, this is a wild edible that lends itself to soaking, simmering and long stewing. However, after the preparation phase, it is possible to grind the lichen with other foods like nuts, dried fruits and spices to make energy balls – much as it might have been used in incredibly snowy areas – or it can be used as a thickening agent, much like seaweeds.

We’ve worked with some chefs who deep fry this one for about 10ish seconds (after thorough cleaning of course) The flavour is mushroomy & earthy and the texture is super light and crispy. Pop a bit of Cep powder with salt on the top for a type of fluffy mushroomy crisp.

As symbionts of fungi, these lichens have some of fungi’s immunoprotective and antimicrobial properties, and some of the algal antioxidant properties. Add moderately and frequently to teas and brews (after proper preparation). This lichen in particular has a history of use in kidney stones, which has a certain logic if you consider that it can live on stone. This prescientific way of knowing is called the Doctrine of Signatures.

If the lichen is dry, it makes a good source of tinder. Many uses have arisen for lichens over the course of human history, including embalming in the Egyptian Empire.

Because of their acid content and interesting colours, lichens were an important preindustrial source of cloth dyes.