Hairy leaves growing in a basal rosette. Each individual leaf has teeth’ coming off the sides that look like a crow’s foot at the end, and antlers closer to the base. 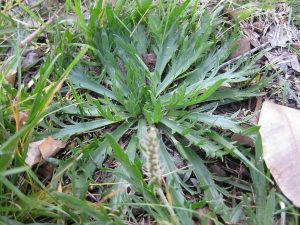 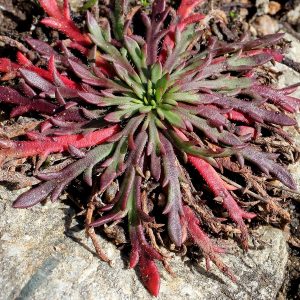 The flowers are densely packed in 1-3cm tips on top of a round, hairy, wiry stem. 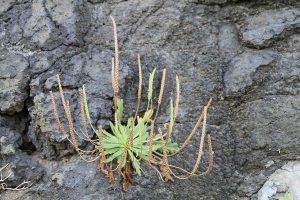 Another coastal plantain, but also to be found on roadsides where salt is frequently spread. It likes grassy cliffs, pockets of growth on rocks, and the grassy areas near sand dunes. It prefers sandy and gravelly soils. It is native to Eurasia and northern Africa but can be found elsewhere. In the UK it is recorded on almost every coast, and is also sometimes found inland.

This is a plant that survives in relatively harsh, exposed conditions, so be mindful of the population when you harvest. Take just a couple of leaves from each plant with a sharp blade, leaving the root stock to regenerate.

The leaves are out by May, and can be harvested until the temperature starts to drop around September. The flavour of the leaves becomes more bitter and the texture more stringy once they have flowered in July-August.

There are several low-growing, hairy plants growing near the coast, but few have the same toothed leaves. Horned poppy leaves are even more hairy, and are much bigger than Buck’s Horn Plantain leaves, but beware that these could cause confusion.

The leaves of this plantain species are a kind of middle ground between Sea plantain and Ribwort plantain; not as succulent as the former without being as fibrous and stringy as the latter. This makes it a better candidate for using like a salad leaf than either of the other two. This species is a known ingredient of the ‘misticanze’ wild salad mixture prepared in the Marche region of Italy. The seeds, like those of the other plantain species, can be used like psyllium husk and can be added to crackers, granolas and breads.

Most of the plantains have a reputation as a gut tonic. The leaves of this species are also considered to be a tonic for sore eyes.

Coronopus comes from the Greek for ‘crow’s foot’, referring to the shape of the leaves.

Cherry / Spring / Autumn / Edible Cherry trees are found in almost every town, village and city with…