Horse Mushroom (agaricus arvensis) which bruises more slowly and only slightly yellow, the flesh of horse mushroom smells of aniseed rather than of iodine. 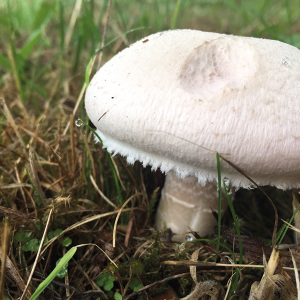 The Yellow Stainer can be found throughout Britain and Ireland and can also be found in other European countries from northern Scandinavia down to the Mediterranean. This mushroom is also recorded in North America.

Initially dome-shaped caps but usually with a flat top, the caps are pure white and matt, later greying, caps grow to between 5 and 15cm diameter at maturity, and they quickly turn bright yellow when bruised.

Gills start off pale salmon pink and turn dark chocolate brown and eventually black with age, they are crowded and free of the stem.

This is not an edible mushroom

After finding many of these I find that some specimens don’t turn yellow quite as quickly as others – I’ve not turned to what seems to be the fail-safe option of putting this mushroom in the microwave for 20 seconds which speeds up the yellowing process massively and can help distinguish the difference between this and the horse mushroom in a very visual way.

Truffles, an introduction One of the most commonly asked questions when we are running courses is ‘W…