Root –  Woody, green/brown with a large tap root. Was allegedly used to treat dog bites in ancient times.  Stems – Green to brown depending on age, the stems are covered in small, sharp thorns.

Leaves – Pinnate with 5-7 leaflets, growing on alternative sides of the stem.

Flowers – Large pink or white flowers with five petals and many stamens. They have a faint sweet smell. 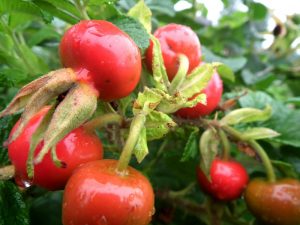 Beware of the thorns.

COULD BE CONFUSED WITH

There are many species of wild rose found in the UK which are all very similar and difficult to identify. Roses are also commonly planted in gardens and some of these have escaped into the wild. But all are safe to eat.

Native to Europe, North West Africa and Western Asia. Is considered an invasive species in Australia and New Zealand.

Dog rose is found in hedgerows, woodland edges and on scrubland. It’s more common in the south of the UK but can be found all over, especially in heavy soils.

The flowers and the fruits are both edible.

The rose petals can be added to a salad and eaten raw and they are used in the production of Turkish Delight and go well with any Middle Eastern dish. They are also good candied and used as a garnish. Rose petal sugar can be made simply by placing petals in caster sugar until they dry.

The flesh from the hips contains high levels of antioxidants, carotenoids and vitamins B and E and is used to make syrup, tea and jams. During the Second World War due to a shortage of citrus fruits, the British government encouraged the picking of rosehips to make a syrup which was issued as a dietary supplement. 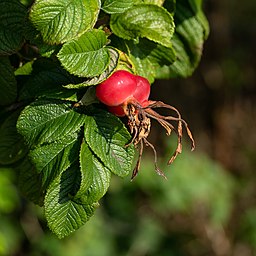 Vetch / Spring / Summer / Autumn / Edible Vetch is a member of the Pea or Fabaceae family, it’s one …