Watercress is a fast growing, aquatic member of the Cabbage family. It’s very nutritious, easy to ID and edible.

The leaves are compound and are made up of small, green leaflets that grow in opposite pairs along the hollow stems. The leaflets are oval in shape and have rounded edges. The terminal leaflet is normally larger. The hollow stems enable the float to float on the surface. 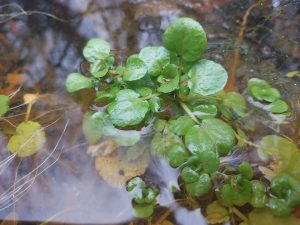 The tiny white to green flowers appear in clusters, they are like all Cabbage species cruciform. (4 petals arranged like a cross) and mature into long seeds pods.

The flowers turn into small seed pod, they are bright green and look like pea pods.

It’s found in slow moving rivers and streams and is an indicator of good water quality as it does not tolerate pollution.

There is a risk when harvesting this plant in the wild, due to Liver Fluke (fasciola hepatica). It’s a parasite that infects the livers of cattle and sheep. In humans fluke can causes systems such as fever, malaise, abdominal pain, gastrointestinal issues, anaemia, jaundice, and respiratory illness and chronic inflammation. The parasite makes its way into the water sources via the animal’s faeces. So if you are foraging anywhere down stream of animals there is a risk on contamination.

Luckily cooking destroys the parasite, so it is best not eaten raw.

Some say that the risk of Liver fluke has been exaggerated but I’ll let you decide.

Fool’s Watercress (Heloscadium nodiflorum) looks similar, but when you crush the leaves they smell strongly of carrots, True Watercress smells peppery or like cress.

The leaves, flowers and seeds can be eaten raw or cooked. But due to the risk of Liver fluke I would always recommend cooking it.

It can be used as a substitute for spinach and has a lovely spicy taste. Watercress soup is quite a famous recipe and is really simple to make.

It’s sometimes described as a ‘Super food’ which is not a term I’m particularly fond of, it’s just a bit of a marketing ploy.

Watercress is undoubtedly good for us and has a long history of use. It is high in Vitamins C, A, K & B6, it also has a higher calcium content than milk and more potassium than a banana. It’s high in iron and is a source of protein.

Watercress has also been linked to anti-ageing processes, having anti-cancer properties and has shown it can support your gut health.

Herbalists have traditionally used it to treat inflammation of the airways, flu, arthritis, baldness, constipation and sexual arousal.

It really is a tasty and beneficial herb and I eat as much as I can. The plants that I gather in the wild are always cooked, but it’s really easy to grow at home too.

I grow it in a large tin bath, as it isn’t part of any water systems there is no risk of Liver fluke so I eat these raw in salads.

The botanical name Nasturtium causes some confusion, people are familiar with the garden flower called nasturtium (which isn’t a Brassica at all, it’s a Tropaeolum) and get the two confused. The flower is named after Watercress as they both have the same peppery flavour. The word nasturtium comes from the Latin nasus tortus, meaning twisted nose.

from the wildlife trust

Foraging at the Coast and by the Sea Foraging comes in many forms, from picking mushrooms in the mid…

The list of health benefits from dandelions is vast, this simple garden weed could be used to aid we…

This pickled Japanese knotweed recipe is incredibly tasty, you can have a pickle within just an hour…