Japanese Quince/ All Year Round / Edible

Japanese Quince is a non-native, thorny deciduous shrub. Up to 2 metres tall.

The leaves are lanceolate, glossy and toothed. Deep green in colour, up to 8cm long.

The plant often flowers twice in a year. The main flowering period is in winter but in summer it can also produce flowers. The flowers are in clusters of 2-4 and are bright orange to red in colour. Up to 6cm across when fully opened.

The fruits called Kusa-boke in Japanese look like small, yellow apples. They appear in autumn, are hard and highly perfumed. As the fruits are so hard and dry they can still be found in good condition right through winter. 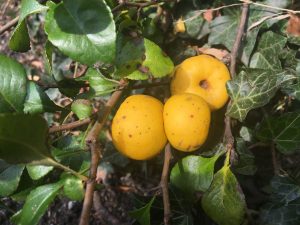 It’s a non-native species originally found in Japan and Asia. In the UK it’s mostly found planted as an ornamental in parks and gardens.

There are many Chaenomeles species that can be found growing as ornamentals in gardens, lots of them won’t produce fruits but any that do would be edible.

The fruits can be eaten raw or cooked, they’re very tough and astringent and definitely get better after bleating or freezing for a couple of days. The taste is a mixture of citrus, pineapple and vanilla.

They have a similar taste and texture as the ‘true’ quince (Cydonia oblonga) and are great for making membrillo or quince cheese.

In Japan they are used to make jams, jellies and liquors, I like them added to tagines and couscous.

They can be used as a substitute for lemons or limes.

In herbal medicine they are used as an anti-inflammatory to treat joint and muscle problems. It is also used as a general health tonic and to fight respiratory diseases.

Polycultures views on it