Giant Hogweed is a non-native invasive member of the Carrot family. It’s classed as scarce in the UK but it can be very common in some areas. When fully grown they can reach up to 4.5 metres tall.

The leaves are large, shiny and deeply lobed. They look intimidating and scary. Deep green in colour, their upper surface is hairless. When fully grown they can be up to 1.5 metres long and almost as wide. 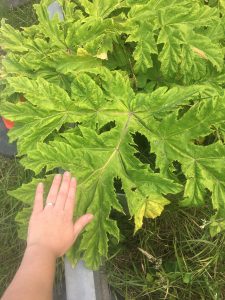 The stems are hollow, green but with age they develop purple or reddish blotches with thick dark hairs. They can grow up to 4.5 metres tall with stems as thick as 10cm. 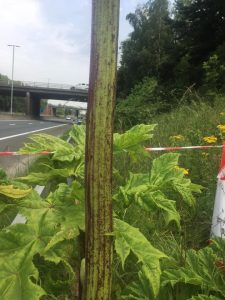 The individual flowers are tiny, white and have 5 petals, they appear as an umbel at the tops of the stems. The flower head looks like the spokes of an umbrella and are lilac to purple in colour. There can be between 50-150 spokes per flowering head. After flowering the plant produces a mass of seeds, up to 50,000 per plant! 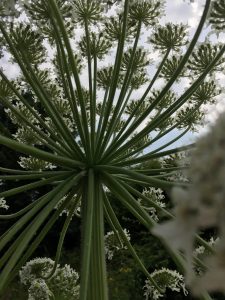 This plant is a serious menace and all foragers should be aware of it. Some call it Britain’s most dangerous plant and The Daily Star have dubbed it ‘Killer Weed’

It is an offense under the Wildlife and Countryside Act 1981 to plant or cause giant hogweed to grow in the wild and in some areas there is a legal requirement to report sighting to DEFRA.

All parts of the plant contain furanocoumarins which are powerful phototoxins, contact causes your skin to lose its protection against the sun and leads to phytophotodermatitis, a serious skin inflammation. Every time this area of skin is exposed to sunlight for up to 8 years the burns come back.

If the saps gets into your eyes it can cause permanent sight loss.

If you do come into contact with the plant you are advised to wash the area well with soap and water and to avoid sunlight for 48 hours.

It is very closely related to Common Hogweed (Heracleum sphondylium) and they do look alike from a distance.

Fully grown Common Hogweed grows up to 2metres tall whereas Giant can reach 4-5 metres, where the plants have grown there are normally last year’s skeletal remains which can be helpful.

The tops of leaves of Giant Hogweed are smooth whereas Common Hogweed has hairy leaves.

The flowers of Giant Hogweed are also much larger and can be up to 1.5 metres in diameter.

A non-native species, it was bought to the UK from the Caucasus Mountains in the 19th century as an ornamental and was grown at Kew gardens. It was added to Kews seed bank in 1817 and it was first recorded in the wild only 11 years later.

From the Woodland Trust

about it as an invasive species

What Plantlife have to say about it