How to Identify Chickweed

Stellaria means star-like, while media means in-the-middle or in between

Contains saponins, which can be poisonous in very large quantities. You would need to consume several kilos before being affected

Speedwell or Scarlet Pimpernel, which are both poisonous, before flowering. However, neither has the single spine of hair down the stem that chickweed has – see image below. 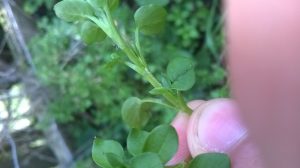 Chaffinches and other small birds

The roots are quite loosely attached to the soil, so the plant can be easily dislodged with little force.

Pairs of leaves are distributed around an inch (2cm) apart along the length of the stem. The leaves are more clustered around the flower heads at the end of the stems. 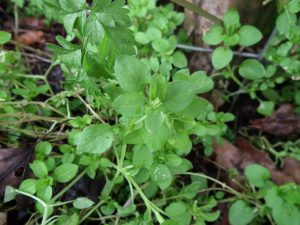 The flowers are white and look like stars. They have five petals but deep divisions give the appearance of 10 petals 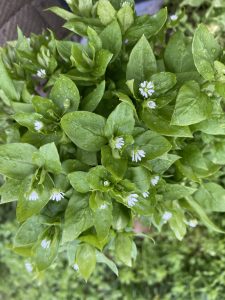 Chickweed has a high iron content so is prescribed by herbalists for people with iron deficiency. It is also used in herbal medicine for skin disorders, respiratory disorders, period pain, and arthritic pain. Please visit your doctor before embarking on any form of treatment

Click here for our guide on making herbal remedies at home

Chickweed is widely considered to be a common garden weed and often removed and composted rather than harvested as a salad green.

Angelica / Spring / Summer / Autumn / Edible A common, annual and edible member of the Carrot or Umb…