Often found on shingle beaches and coarse sand, well above the tide line.

In flower on a characteristic shingle beach

Found mostly from Norfolk to Cornwall, and then on the coast facing the Irish Sea.

Never uproot them – these are perennial plants that can be very long lived. Try not to damage the young shoots. They are not common, so take care of the populations you find. Having said that, in a select few places they are incredibly abundant. Be careful you are not about to pick from a SSSI or other conservation designation site. In general stick to the British Botanical Society’s guideline of 1 in 20.

When young, the leaf shoots emerge with a magenta to violet colour, slowly turning green as they grow, but often retaining a purplish colouration to their stems and edges. The leaves have a slightly teal hue, and can get enormous, with a succulent, thick texture and sharp crinkling along their edges. The leaves grow from a central base. 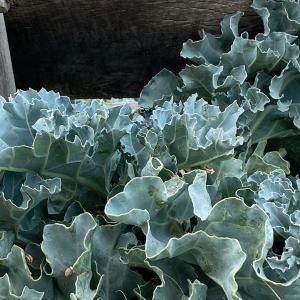 The seeds are globular. 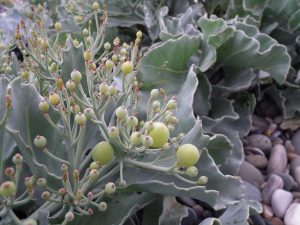 The young shoots are often prized, and this is the main culinary event. They should be blanched quickly and enjoyed for their full flavour with a minimum of additions. The younger leaves can be used as a vegetable much like supermarket kale, the unbloomed buds as a broccoli substitute and the flowers as a delicious addition to salads. The young seeds are horse-radish flavoured before they get too tough, and are great to pickle providing you leave enough to germinate the next generation. Do not attempt to use the roots.

A wonderful tonic food that will stimulate circulation and keep pathogens at bay, as well as being full of minerals and nutrients found by the seaside and synthesised by the plant to keep itself healthy in a challenging environment. It is said to be diuretic, although is not widely used in herbal practice.

This plant was once considered a superior food to cabbage and could have become a staple. It was cultivated, but as urbanisation took place its range narrowed and its wide use was forgotten.