White cap with white fibrils, starting off egg shaped,  becoming long bell shaped. The cap can reach upto 7cm, at maturity the cap will start to deliquescing (liquifying into its spore mass) Some times gets called a lawyers wig because of the curled fibrils.

Tall white stem which has a tight ring, it is bulbous at the base.

Adnate or free gills which are white, turning reddish pink to grey then black as they deliques 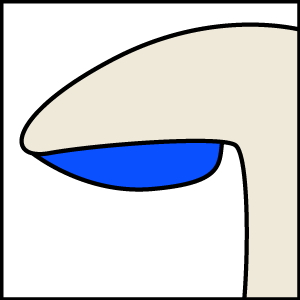 This mushroom has a short shelf life once picked it can start to become black liquid within 24hrs. Young specimens are excellent fried.