Identification Guide for Lords and Ladies

A very common, toxic species. Anyone who gathers wild garlic should be aware of this plant as it appears at the same time of year in similar locations.

Physical Characteristics for Lords and Ladies

The flowers grow on a poker-shaped spike called a spadix, this is partially covered in a green leaf-like hood called a spathe.

The spathe can be up to 25 cm high and the fruiting spike which follows later in the season may be up to 5 cm.

The leaves appear in the spring and are 7 to 20 cm long.

They are dark green, glossy/waxy and can have purple or dark blotches on them.

The leaves are harpoon shaped with two distinctive points on the base of the leaves sticking out on either side of the stalk. 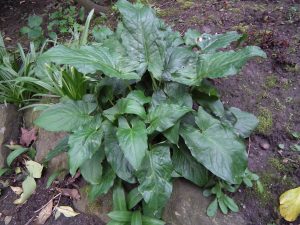 The tiny, yellow flowers are hidden at the base of the spadix.

The berries appear after the flower dies back and are bright red, they can still persist until winter and really stand out. 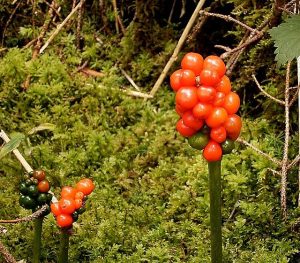 The large roots or tubers are used to store starch and can be up to a foot underground.

All parts of the plant are toxic and can produce severe allergic reactions so care needs to be taken.

The plant very often grows in the same places as Wild Garlic (Allium ursinum) and just touching the leaves can irritate your skin.

The berries are potentially deadly poisonous, they contain oxalates of saponins which have needle-shaped crystals that irritate the skin.

They can cause swelling of the throat and breathing difficulties if consumed and as there is no known antidote this can sometimes be fatal.

In reality they give you a tingling, burning sensation as soon as they touch your lips so it would be difficult to eat enough to do any real harm.

I have heard reports of people using the leaves as a woodland toilet paper with painful consequences.

The Italian arum (Arum italicum) is almost identical but this has green and white variegated leaves.

Although toxic raw, the root can be used once thoroughly roasted, it was ground and was once traded under the name of Portland sago.

In the past it was used to make a drink called saloop, which was widely drunk before the introduction of tea and coffee.

The roasted and ground roots can also be used as a substitute for Arrowroot to thicken soups and stews.

Be aware if not correctly prepared it is highly toxic.

It was used in the past to induce sweating and vomiting, and to treat internal parasites.

The roots were a traditionally source of starch used for laundry particular in churches. Apparently, only starch made from plants could be used on communion linen.

The common name Lords and Ladies and many of the other common names liken the plant to male and female genitalia.

The hood created by this plant around the flowering tops has a warmer temperature than the surrounding space, growing in spring this warm space is welcomed by insects and they often spend time in there, whilst in there the plants drop pollen on to them to spread further afield.

Cooking with Wild Foods in the Kitchen Wild food can literally be found everywhere, from the centre …

This pickled Japanese knotweed recipe is incredibly tasty, you can have a pickle within just an hour…