They are saprotrophic, living off dead matter, they can be found in areas that collect lots of leaf litter in autumn, sometimes they appear in gardens and on compost heaps. They can appear on their own or in fairy rings.

Convex and then flattening out with age, they tend to develop a central depression and have a wavy margin they can be quite changeable. They are typically lilac but turn light brown from the centre when they are dry. Up to 8cm across. 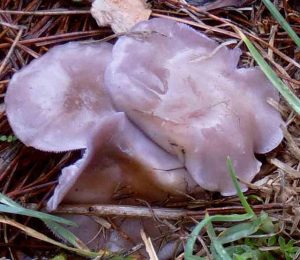 Lilac to brown in colour, furry or downy getting more so towards the base. Up to 6cm long. 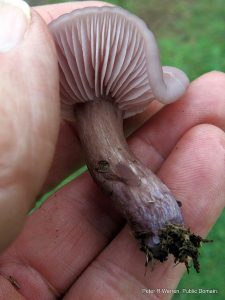 The gills are grey to lilac when young but get more buff with age. They are sinuate or emarginate and they are crowded.

They can be used in a similar way to Wood or Field Blewits, they have a sweet, mushroomy flavour and are delicious simply fried in butter.

They must be fully cooked before consumption and even then they don’t agree with everyone. If it is your first time trying them, you’re advised to taste a small piece and wait for 24 hours to see whether there are any adverse reactions.

The Wood Blewit (Lepista nuda) looks very similar and grows in similar habitats, in general the Sordid Blewit s smaller and has thinner flesh but both are edible so have a similar taste.

The Violet Webcap (Cortinarius violaceus) can also looks similar but this mushroom has a rusty spore print, sturdier stems and they often have remnants of their web like cortina on the stems. This mushroom should be avoided.

The name Lepista is derived from Latin and means a wine pitcher or goblet, when fully mature the caps of Lepista species often do become concave. As it sounds, sordida simply means sordid (in the sense of dingy, filthy or foul).