An exploration of Ganoderma species and how to identify, harvest and prepare them.

Herbal Uses for the Reishi Mushroom

Knowledge and use of Reishi mushroom(s) in the western world have recently ballooned.

When a group of mushrooms are referred to with the same name, the group is known as a complex.

The Reishi complex has a long history of reverence and uses in several East Asian cultures, and a far shorter, but also very striking, history of investigation in clinical science. You’ll find a plethora of blog posts, articles and scientific journal entries exploring the mechanisms of action of the various carbohydrate chains, fatty acids, triterpenoids and other juicy names for chemicals that Reishi fungi synthesise to help themselves survive, and that happen (some say due to evolutionary processes, others say biochemistry is lazy and conserves what works) to exhibit potent protection of human health when ingested as a tea, broth or powder.

We’ll explore the ways you can work with these mushrooms a little later, and we’ll assume that you can find plenty of other sources that tell you exactly what they might be doing inside you elsewhere.

Take a walk in a British woodland and you are less likely to find a shiny, orange-coloured Reishi bracket (Ganoderma lucidum) than one of the more common Artist’s Conk (Ganoderma applanatum) with its matt cap and abundant, bulging white flesh. The good news is that they are both safe to ingest in food quantities (provided you have no clotting disorders and are not taking particular medications – if in doubt, check with a medical herbalist or doctor!) and have both had reams of research conducted on their biological activity. There are in fact two subgroups in the Ganoderma genus (meaning the denomination above species):

Knowing What You’re Looking For…..

Reishi/Ganoderma mushrooms are the fruits of white-rot fungi that live on the wood and roots of trees. Some species parasitise living trees and are considered agricultural pests, particularly in tropical areas. Others feed on dead wood. Most of them are quite specific about what kind of wood they’re after, so take note (do this with any mushroom you identify) of what kind of tree they’re living on.

You might have heard of Reishi mushroom……But did you know it is many mushrooms?:

Ganoderma lucidum, the species that is most used in western herbal medicine, is a relatively rare find in Britain and Ireland, and if you do come across it it’s likely to be in the southern half of the island. It has a shiny, red-brown upper surface and can appear with or without a stalk protruding horizontally from the wood it grows on. The flesh is white, and there may be a white rim on the upper surface. It is found growing on deciduous and coniferous wood, but here usually prefers deciduous, and can be distinguished from a close relative, the Hemlock Varnish Shelf (Ganoderma tsugae) because the latter prefers coniferous wood.

Artist’s Conk/Bracket/Fungus and Southern Bracket, Ganoderma applanatum and G. australe, are some of the ones you’re most likely to find here in the UK. They particularly like Beech, both dead and alive, but may be found on other deciduous tree species. These species are almost indistinguishable from each other, and the undersides of both can be used as a canvas on which to draw. A significant amount of research has been undertaken on these species as well as the lacquered relatives. These are perennial mushrooms, and you can see the ringed annual growth. When harvesting, just slice/hack a couple of rings away and leave the remaining mushroom to continue growing.

The spore surface of all the above species is white. The spores themselves are chocolatey brown and are often found on top of the mushrooms. A mycologist once told me that this is because, as they leave the pore tubes, the aerodynamics of the microscopic spores are such that they interact with the air, spitting them up and over to the top surface of the mushroom. I have yet to find this corroborated in writing!

The texture of all the above mushrooms does not lend itself to easy eating. They are tough, fibrous and woody. Instead, think about the best ways to extract them. We’ll go through this in more detail below.

When harvesting, you might need a strong implement! Always gather sensibly, keeping in mind that people are low on the list for creatures that depend on this organism eco systemically. Mushrooms are considered aerial parts, so provided you are gathering for your own purposes in the UK, as long as you have public access to the land, you are operating legally.

Use the same judgement when collecting wild foods as when foraging at a supermarket – choose healthy-looking specimens that have not been invaded by insects or other fungi, like rot.

Given their impenetrable texture, these are mushrooms that you need to extract using water, alcohol, and potentially heat.

If you want to make a tincture,

The advantages of tinctures are that they have a long shelf life, extract a good range of therapeutic compounds, are possible novel additions to cocktails, desserts and sauces, and don’t take much space, time or maintenance.

Dry them well in a low heat oven or in a dehydrator. Store well out of sunlight and the reach of damp, and add to stocks, stews and tea mixes. My favourite way to do this last bit is to put everything in a big Thermos type flask and let it sit for a couple of hours before warming up with the deliciously complex flavours that have seeped into the water after all that extra time and heat.

Know that every time you add mushrooms to your soups, stocks and teas you are supporting your immune system, both in helping it care for itself, and in carrying out anti-pathogenic activity. You are increasing the number of chemicals your body has to work with, which adds complexity and resilience to your system. And, perhaps most of all, you have taken the tonic medicine of going outside, looking around at the wonders of a woodland, and coming home with a little bit more wild. It’s the simple things that keep us healthiest in the end. 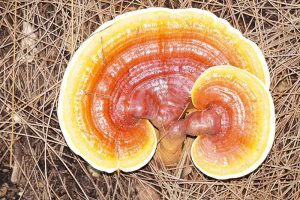 Mosaic Puffball / Summer / Autumn / Edible Description  An easy to identify mushroom, they are not o…

This Rose and Chaga Coconut Macaroons recipe is reminiscent of a heady summer day, these sweet treat…