Artist Bracket / All Year Round / Edible

Common on dead wood, logs and stumps, often in tiered groups. Most commonly found on hardwoods such as Oak and Beech but they do sometimes appear on conifers.

The mushroom overall has the shelf like shape, the upper surface is tan to brown in colour.

No real stem, they are attached broadly to the growing medium.

Pores and tubes rather than gills. The pores are white when young and darken with age or when damaged. The lower surface ‘releases’ the spores. As many as 4.7 billion of them from a 10cm-10cm section in a 24 hour period! 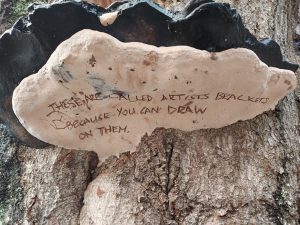 Definitely not what you would call a ‘bacon and eggs mushroom’ as their hard texture is unpleasant but they are very often used as a flavour enhancer in Asian cuisine for their umami flavour. They make a nice mushroom stock for ramen or soup.

A tea can also be made by boiling a couple of either fresh or dried slices in water for around an hour, it can be quite bitter so add honey to make it more palatable.

The Artist Bracket has been used medicinally for thousands of years. In Chinese medicine it has been used to treat rheumatic tuberculosis and to resolve indigestion, relieve pain and reduce phlegm. Studies have also shown that it also has anti-tumour and anti-oxidation qualities.

The Southern Bracket (Ganoderma Australe) can look similar but it has much larger pores which don’t bruise when damaged.

The Lacquered Bracket (Ganoderma Resinaceum) also looks similar but this is quite rare in the UK and exudes a yellow resin from its edges.

The Horse Hoof Fungus (Fomes Fomentarius) which is a lot thicker and more hoof looking.

There is some evidence of other animals using this mushroom medicinally, in her book ‘Gorillas in the Mist’ Dian Fossey writes

‘Still another special food (for the gorillas) is bracket fungus (Ganoderma applanatum)… The shelflike projection is difficult to break free, so younger animals often have to wrap their arms and legs awkwardly around a trunk and content themselves by only gnawing at the delicacy. Older animals who succeed in breaking the fungus loose have been observed carrying it several hundred feet from its source, all the while guarding it possessively from more dominant individuals’ attempts to take it away. Both the scarcity of the fungus and the gorillas’ liking of it cause many intragroup squabbles, a number of which are settled by the silverback, who simply takes the item of contention for himself.’