Dead Nettle is one plant sometimes confused with the common stinging nettle, it’s actually in the mint family although it has no mint flavour. It is edible and adds an earthy flavour to salads and herb mixes.

Lamium album & Other Species of Lamium

Europe, including Britain, from Scandanavia south and east to Spain, the Himalayas, and Japan. Fields, hedgerows, woodland edges and clearings, and moist waste ground.

Lamium album & nearly all other Lamium Species is a PERENNIAL growing to 0.6 m (2ft) by 1 m (3ft 3in) at a medium rate, with green, four-angled stems.

The leaves are 3–8 cm (1.2–3.1 in) long and 2–5 cm (0.79–1.97 in) broad, triangular with a rounded base, softly hairy, and with a serrated margin and a petiole up to 5 cm (2.0 in) long; like many other members of the Lamiaceae, they appear superficially similar to those of the Stinging nettle (Urtica dioica) but do not sting, hence the common name “dead-nettle”. 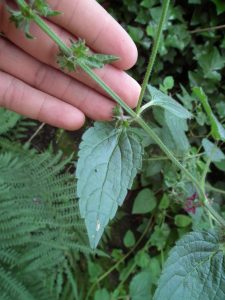 The flowers are white, red and a sometimes yellow, they’re produced in whorls (‘verticillasters’) on the upper part of the stem, the individual flowers 1.5–2.5 cm (0.59–0.98 in) long. The flowers are visited by many types of insects, but mostly by bees. 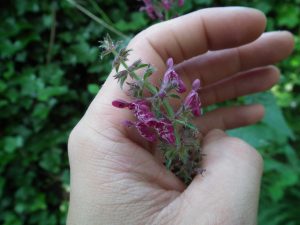 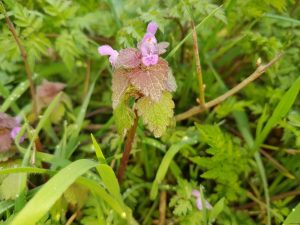 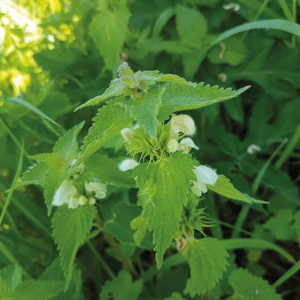 The stems are hairy and square cross-sectioned 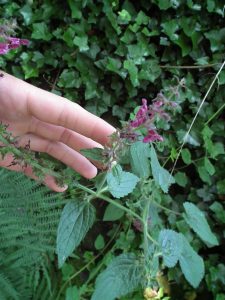 Young leaves – raw or cooked. They can be added to salads or mixed with other leaves and cooked as a potherb. They can also be dried for later use. The leaves are a good source of vitamin A. A pleasant herb tea is made from the flowers

White dead nettle is an astringent and demulcent herb that is chiefly used as a uterine tonic, to arrest inter-menstrual bleeding and to reduce excessive menstrual flow. It is a traditional treatment for abnormal vaginal discharge and is sometimes taken to relieve painful periods. The flowering tops are antispasmodic, astringent, cholagogue, depurative, diuretic, expectorant, haemostatic, hypnotic, pectoral, resolvent, sedative, styptic, tonic, vasoconstrictor and vulnerary. An infusion is used in the treatment of kidney and bladder complaints, diarrhoea, menstrual problems, bleeding after childbirth, vaginal discharges and prostatitis. Externally, the plant is made into compresses and applied to piles, varicose veins and vaginal discharges. A distilled water from the flowers and leaves makes an excellent and effective eye lotion to relieve ophthalmic conditions. The plant is harvested in the summer and can be dried for later use. A homeopathic remedy is made from the plant. It is used in the treatment of bladder and kidney disorders and amenorrhoea.

Appears in early spring. It is in flower from Mar to October.

Though superficially similar to species of Urtica (true nettles) in appearance, it is not related and does not sting, hence the name “dead-nettle”.

Buttercups / All Year round / Toxic There are many types of Buttercups, three species are very commo…

Lacto fermented Wild Garlic is quite a mouthful to say and sounds quite complicated, however the tru…