It is native to Europe and it is known elsewhere, including North America, as an introduced species and sometimes a weed. Damp, often shady localities, in meadows, woods etc, especially near streams and rivers

Large, hairy, broad leaves. Feels rough to the touch because of the stiff hairs. 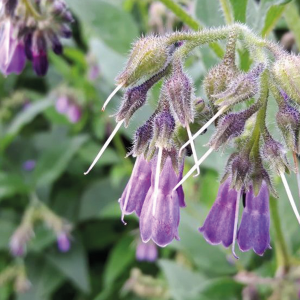 Has a black, turnip-like root.

The plant grows very quickly, producing a lot of bulk. It is tolerant of being cut several times a year and can be used to provide ‘instant compost’ for crops such as potatoes. Simply layer the wilted leaves at the bottom of the potato trench or apply them as a mulch in no-dig gardens. A liquid feed can be obtained by soaking the leaves in a small amount of water for a week, excellent for potassium demanding crops such as tomatoes. The leaves are also a very valuable addition to the compost heap

Young leaves – cooked or raw. The leaf is hairy and the texture is mucilaginous. It may be full of minerals but it is not pleasant eating for most tastes. It can be chopped up finely and added to salads, in this way the hairiness is not so obvious.

Young shoots can be used as an asparagus substitute. The blanched stalks are used. Older leaves can be dried and used as tea. The peeled roots are cut up and added to soups.

A tea is made from dried leaves and roots. The roasted roots are used with dandelion and chicory roots for making coffee.

Comfrey is a commonly used herbal medicine with a long and proven history in the treatment of various complaints. The root and the leaves are used, the root being more active, and they can be taken internally or used externally as a poultice. Comfrey is especially useful in the external treatment of cuts, bruises, sprains, sores, eczema, varicose veins, broken bones, etc, internally it is used in the treatment of a wide range of pulmonary complaints, internal bleeding, etc. The plant contains a substance called ‘allantoin’, a cell proliferant that speeds up the healing process. This substance is now synthesized in the pharmaceutical industry and used in healing creams. The root and leaves are anodyne, astringent (mild), demulcent, emollient, expectorant, haemostatic, refrigerant, vulnerary. Some caution is advised, however, especially in the internal use of the herb. External applications and internally taken teas or tinctures of the leaves are considered to be completely safe, but internal applications of tablets or capsules are felt to have too many drawbacks for safe usage. See also the notes above on toxicity. The leaves are harvested in early summer before the plant flowers, the roots are harvested in the autumn. Both are dried for later use. A homeopathic remedy is made from fresh roots, harvested before the plant flowers. This has a very limited range of application, but is of great benefit in the treatment of broken bones and eye injuries. The German Commission E Monographs, a therapeutic guide to herbal medicine, approve Symphytum officinale for blunt injuries.

The plant was rated in fourth place for per day nectar production per flower in a UK plants survey conducted by the AgriLand project which is supported by the UK Insect Pollinators Initiative. When the number of flowers per floral unit, flower abundance, and phenology were taken into account it was the only member of the top 10 list for that measurement that also placed in the top 10 list for most nectar per unit cover per year. This means that this plant not only produces a great deal of sugar in its nectar on a daily basis, it provides a lot of nectar when compared to other UK plants tested in that survey on a yearly basis, making it a strong source of nectar overall.

This plant contains small quantities of a toxic alkaloid which can have a cumulative effect upon the liver. Largest concentrations are found in the roots, leaves contain higher quantities of the alkaloid as they grow older and young leaves contain almost none. Most people would have to consume very large quantities of the plant in order to do any harm, though anyone with liver problems should obviously be more cautious. In general, the health-promoting properties of the plant probably far outweigh any possible disbenefits, especially if only the younger leaves are used. Use topically on unbroken skin. May cause loss of appetite, abdominal pain, vomiting. Do not use with Eucalyptus. Do not combine with herbs containing pyrrolizidine alkaloids (e.g. agrimony, alpine ragwort, help, tansy ragwort).

Leaves begin to appear as early as January/February. It is in flower from May to June, and the seeds ripen from Jun to July. The species is hermaphrodite (has both male and female organs) and are pollinated by Bees.

The lookalike to be most concerned about is Foxglove Digitalis purpurea. In early spring, the young leaves of both plants look very similar, however, there are key features to help with identification: