This Green Pine Cone Syrup Recipe is one of the most simple things I make every year, you can pick these, mix them up and simply leave them to do their thing. It’s almost indestructible too – I’ve had this concoction sat in my cupboard for up to 3 years and it’s still absolutely fine 🙂

This recipe is sometimes known as Mugolia, this refers to the recipe being specifically made with Mugo Pine (pinus Mugo) although the recipes works just as well with any of the green cones from any of the pines.

This is one of those things that is super easy but you can actually make it sound super fancy, and high-end restaurants love to this on their menus. Imagine the name,

It sounds incredible right, but it also sounds a bit like something you’d find in Willy Wonkas cupboard, the truth is it’s just pine cones from the local park added to brown sugar and left to do it’s thing.

It took me a while to come around to this recipe, I first tasted it after being posted a bottle from a friend in Norway after doing a 10 day private foraging event there, it arrived in the post and after translating the label it stated “Pine Sugar” – I tasted it and was blown away.

After trying to recreate it loads of times using different parts of pine, it was only 2 years later when I called the person and asked for the exact recipe that I realised how it was made. There was me extracting resins from the bark and heat infusing it with different sugars, taking a lot of effort and time whilst doing it. When all along I just had to pop the cones in a jar wth brown sugar and leave it to play together. 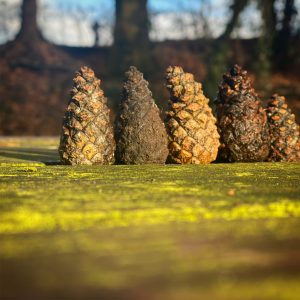 Here’s a guide with help to discover the difference between pine, spruce and firs

Be careful of Yew…

It’s worth making the note here that there’s one conifer you need to be vary aware of when out picking any tree that has needles, and that is one called Yew, Yew is deadly toxic.

The taxines contained in the tree are used in chemotherapy for a wide range of cancers, these are still commercially collected at present, in the incorrect doses they are lethal. 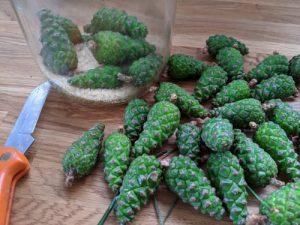 That’s it, honestly, nothing else to do, I love it. I usually leave mine about 2 weeks but you’ll know when it’s ready as the sugar will have all turned to a syrup, pass it through a sieve and you have green pine cone syrup.

You can add it to marinades, drizzle it on top of pancakes or pour it straight into an ice cream churner to create a green pine cone sorbet. 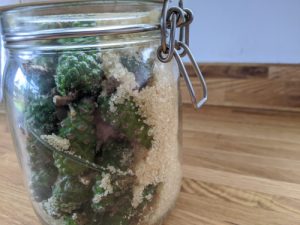 Buttercups / All Year round / Toxic There are many types of Buttercups, three species are very commo…

Fig Leaf Cookies This is a nice, simple and delicious way to use the leaves from a fig tree to get a…