An evergreen tree up to 20 meters tall but quite often used as hedging. Virtually all parts of the Yew Tree are potentially deadly poisonous.

Physical Characteristics for the Yew Tree

Small, flat, green needles growing opposite each other. They lack the pair of silver lines on the back of the leaf which is present on other short needled conifers.

The male flowers and not ‘true’ flowers but clusters of stamen. They turn yellow with age before releasing their pollen.

The female flowers are covered in scale like structures, when pollenated these develop into the fruits. 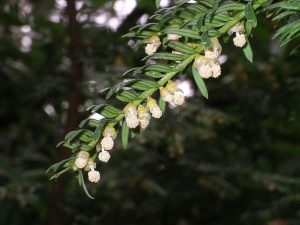 The berries only appear on female trees, they start off green ripening to a bright red colour and are almost cup shaped with a dark brown seed visible inside. The seeds itself is toxic.

Yew does grow in the wild but it is more often found as a planted species typically in church yards, parks, graveyards.

The seeds, leaves, stems and bark of the tree contain many known toxins including various alkaloids, an irritating volatile oil and a glycoside that breaks down to form cyanide. Symptoms of poisoning include vomiting, abdominal pain, coma and in extreme cases death by respiratory and heart failure.

Avoid any food that grows in the shadow of Yew. As the needles fall to the ground and decompose they potentially contaminate the ground.

Douglas fir but this has longer, thinner leaves which are very aromatic and Douglas fir produces cones not berries. Yew is the only conifer that produces true berries.

In theory, it could be confused with any of the conifer species if attention to detail is taken, because of this we’ve made up a little blog to highlight the different conifers.

Only the red flesh that surrounds the seed is edible.

All other parts of Yew are potential deadly.

The flesh is sweet and sticky and makes a great flavouring for ice cream.

The taxines contained in the tree are used in chemotherapy for a wide range of cancers, these are still commercially collected at present.

Yew is one of the oldest living plants in the world with some reported to be over 9000 years old.

The Fortingall Yew in Perthshire, Scotland, is estimated to be anywhere from 2,000 to 7,000 years old.

Traditionally the wood has been one of the major components for making long bows.