Best to collect fresh, young (not too woody) flowering tops (leaves and flowers) when the flowers have just bloomed – usually July – October, depending on the climate of your area – and certainly consider that the plant is past its best when the flowers have turned brown. The plants will flower after the first year.

This is a plant that thrives on acidic soils and notoriously stark landscapes, with the help of symbiotic mycorrhizal fungi. You’ll find heather in open woodlands, heathland (surprise surprise), boggy moors and river banks with the right soil chemistry.

To some extent they could be considered an indicator species of acidic ground, which tends to be so due to extreme weather and lots of rain which leaches available nitrogen away to lower altitudes. Heather is adapted to tolerate extreme exposure, cold, and solar radiation very well.

Heathers can live for about 3 decades, during which time they provide food and shelter for a massive variety of insects, invertebrates, birds and mammals, as well as being a nursery for abundant lichens, mosses and young trees.

They are an abundant variety of plants, and are skillfully (and sometimes not so skillfully) burned by land stewards in sections when the plants become woody and degenerate. Burning should never be tried by untrained people.

A woody, dwarf shrub growing to about 900 cm in sheltered areas, 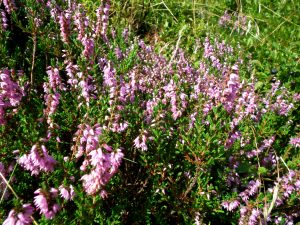 bell-shaped, purple flowers. The flower colour can depend on the precise chemistry of the soil. 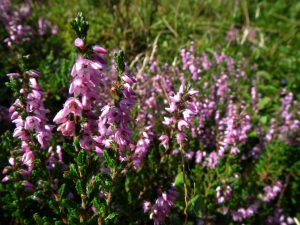 Little else is as abundant in its chosen habitat, and when it’s in flower there isn’t much else that bears resemblance.

The flower colour can vary, and while it’s Calluna vulgaris that is mostly described, other heathers may be used the same way.

Being relatively woody, this is a plant best infused into liquid and then added to food.

Try vinegars, or making a tea with which you then cook your rice, quinoa, barley or other grain.

The flowers could be made into a syrup for drinks and deserts, and of course you could explore the options for fermenting your own alcoholic brews, following in the footsteps of many cultures of the British Isles.

Heathers are not currently a very widely used species in Western herbal medicine, although for those that take an interest in readily available British herbs, it should be a staple tonic in the tea cabinet.

Being a plant that thrives on acidic soils, it is an example of showing the ‘doctrine of signatures’, an intuitive way to grasp the actions of a plant based on how and where it grows.

Heathers have traditionally been used for arthritis, kidney and bladder issues and gout, all conditions in which the human body’s acid-base balance is out of whack.

It can be safely drunk as a tonic tea by most people, although if you have any of the above conditions or take other medications you should check with a herbalist or other healthcare provider to check for interactions before beginning on a regime.

Some people – and dogs – can be allergic to heather pollen during high summer. If so, make sure you wash all your clothes and hair (to avoid rubbing into the pillow) when you arrive home.

Heather has long been a traditional ingredient in mead and ales, for which there are plenty of recipes available should you fancy giving it a go! If you have never tried heather honey, it is probably one of the most delightful substances on earth.

The Dandelion Coffee Panna Cotta recipe is a fancy-sounding but deceptively easy sweet to make, whic…