Misidentification with poison hemlock which is harmful to mammals.

There’s a couple of deadly toxic plants within this family and as you begin to start foraging they can look quite similar so time must always be taken to learn them all before picking any of them.

Fools parsley (Aethusa cynapium), has much thinner leaves that a little more dill like than parsley like

Poison hemlock, Has darker more shiny leaves, and has red blotches all over the stems

Found in most of Europe, including Britain, south and east to N. Africa and Siberia.

Common in hedgerows and verges.

Starting off as a rosette of long stems that are celery shaped with small hairs going up to opposite pairs of feather-like leaves. As it matures it sends up a rounded, ribbed and hairy. 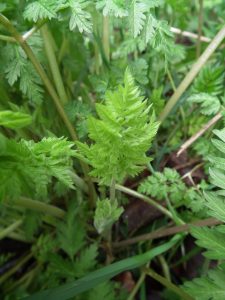 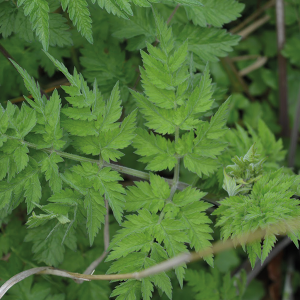 The stems never have purple spots but can have purple blocks of colour usually starting from the base these purple colourations fade and don’t look like blotches or birthmarks. The stems are very celery like and have a ridge/ groove running up the centre of them. 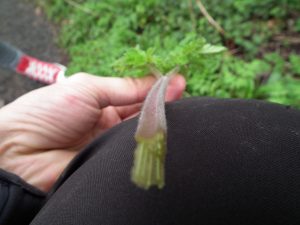 The flowers grow in umbels, this looks like the spokes of an umbrella branching out from the tall stem with a cluster of flowers at the end of each spoke. The flowers are small with a creamy centre and 5 unevenly sized petals (a bit like a flower a child would draw). 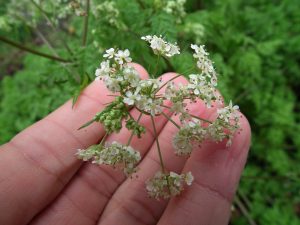 The seeds are in place of each flower head so are clustered each seed is a long tear drop shape and they’re in pairs so it looks a bit like a deer footprint.

This plant has a faint parsley-like smell especially when crushed, the leaves and stem have a parsley-like flavour and the flowers and seeds having a carroty flavour.

The stems throughout history have been used by children as pea shooters.
It is said that it is unlucky to have cow parsley inside the house and that it is the harbinger of death.

The whole of the plant is edible, the leaves, stems and flowers are great in salads or used as a pot herb to flavour soups, pestos and stews etc. The seeds are great ground and added to curries or rice to flavour. The roots can also be cooked like a carrot.

The roots can be made into a tonic to help weakness.

Be careful when harvesting cow parsley as it can grow in the same habitat as poison hemlock and sometimes growing together so  be sure to check every stem you pick for the celery shaped hairy stem that has no spots.