How to Identify Yarrow

The English name yarrow comes from the Saxon (Old English) word gearwe, which is related to both the Dutch word gerw and the Old High German word garawa.

It has distinct feathery leaves and can remain hidden amongst long grass until you look closely. The leaves are alternate. The name ‘millefollium’ referring to its many leaves. It flowers from early summer to early autumn and has a composite flower head with 5 ray flowers and 10-30 disc flowers.

Evenly distributed along the stem, with the leaves near the middle and bottom of the stem being the largest. The leaves have varying degrees of hairiness (pubescence). The leaves are 5–20 cm (2.0–7.9 in) long, bipinnate or tripinnate, almost feathery, and arranged spirally on the stems. The leaves are cauline, and more or less clasping. 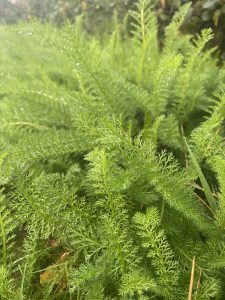 Have 4 to 9 phyllaries and contains ray and disk flowers which are white to pink. The generally 3 to 8 ray flowers are ovate to round. Disk flowers range from 15 to 40. The inflorescence is produced in a flat-topped capitulum cluster and the inflorescences are visited by many insects, featuring a generalized pollination system. 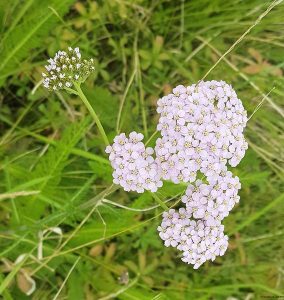 Leaves – raw or cooked. A rather bitter flavour, they make an acceptable addition to mixed salads and are best used when young. The leaves are also used as a hop substitute for flavouring and as a preservative for beer etc. An aromatic tea is made from flowers and leaves. Essential oil from the flowering heads is used as a flavouring for soft drinks.

Sitz bath – Dried whole plant. Use 4 ounces per gallon of water and infuse for 30 minutes, then add to sitz bathwater.

Yarrow has not been proved safe for use in pregnancy and lactation so caution is advised. Some people who are sensitive to the Aster family may have a mild allergic reaction. In rare cases, yarrow can cause severe allergic skin rashes; prolonged use can increase the skin’s photosensitivity. This can be triggered initially when wet skin comes into contact with cut grass and yarrow together.

According to the ASPCA, yarrow is toxic to dogs, cats, and horses, causing vomiting, diarrhea, depression, anorexia, and hypersalivation.

In a standard rodent model for reproductive toxicity, aqueous extracts of yarrow produced a significant increase in the percentage of abnormal sperm.

The leaves seem to be available most of the year-round, tender leaves appearing in early spring. It flowers from June to August and the seeds are usually available from July to September.

I have heard it said that you could confuse Yarrow with Wild Carrot, or Hemlock. However, I find that hard to believe. Learn to recognize the characteristics and you’ll be fine. For one thing, Daucus corota (Wild Carrot) does have vaguely similar leaves, but smells of carrot when crushed, and is edible anyway, and for another Conium maculatum (Hemlock) absolutely stinks and you’d be daft to put anything that smells like that in your mouth!

Hatfield Botanic Pharmacopeia speaking of Yarrow in 1886 – “it is indeed difficult to say in what complaints it may not with advantage receive employment. It is one of the common wayside herbs, and as useful and well adapted for recourse in almost any emergency where medicines are not at hand, as it is common.”

This herb is named after the great Greek hero named Achilles who fought in the battle of Troy.

Achilles was the son of the goddess Thetis and the mortal Peleus and was born a mortal. In an attempt to make her son immortal, Thetis dipped him into the River Styx. The only body part that remained mortal and vulnerable was his heel as his mother had held Achilles by one heel. Achilles grew up to be a famous hero and in the Battle of Troy Achilles used the herb Yarrow to heal his wounded soldiers. Achilles eventually was struck by an arrow on the only vulnerable spot on his body; his heel and he died.

Some Simple recipe are the best and this Birch Syrup, yoghurt & nuts Breakfast is one of them 🙂 …

Elderflower Lemonade A zesty flavour that will cleanse your palette, refresh and hydrate your body a…