This mushroom is found in mixed woodland

The most common Russula in the UK, it has a yellow cap and is an excellent addition to the pot.

Yellow, light tan coloured. Starting convex, flattening with a depression in the middle. 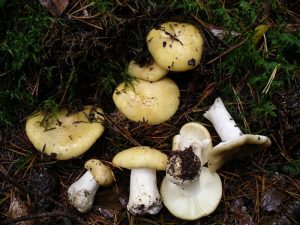 White becoming off white/ grey with age. Should snap a bit like chalk.

A great addition to mushroom dishes

Other Russulas. As long as the cap is yellow you are fairly safe with Russulas with one important exception, The Geranium Scented Russula, which is paler yellow, smells of geraniums and is poisonous. As long as you go through the four step Russula test then you should be okay –
-Snap – Does the stem snap like a piece of chalk?
-Flick – Do the gills break when you flick them gently?
-Peel – Does the skin on the cap peel away?
-Taste–  this should only be done when you have gone through the other steps and are confident that you have a Russula. If a tiny amount placed on the tongue a chilli like burn or tingle means the mushroom is poisonous but a pleasant mushroomy taste means it is edible.