Plantago maritima subsp. maritima (there are several subspecies, differentiated by their geographical distributions).

Looking a bit like a wider, more succulent grass stem with a slightly concave central zone, these plants grow in a basal rosette and have vertical flowering stalks that have tougher stems.

There are 3-5 veins on the leaves if you look closely, a hallmark of any plantain species, although because this species is so much more succulent, they are much less obvious than in the plantains you might find in your lawn. They have a slightly waxy coating on their surface and are sickle-shaped in cross-section. 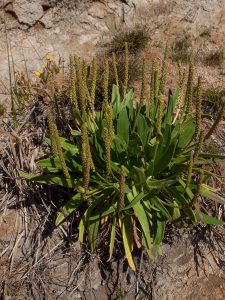 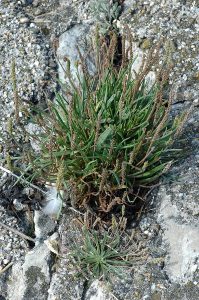 The flowering stalks can be up to 30cm tall in favourable conditions, and the leaves can be quite abundant. The flowering stems have tiny silvery hairs pressed into the stems, making it appear fuzzy. The blossoms are quite small and appear yellow.

Overall it is most similar to ribwort plantain. 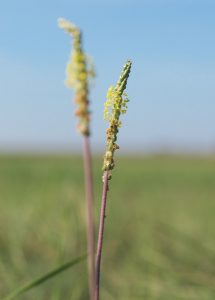 The seeds are small and bullet shaped, forming everywhere there was a flower on the stem.

This is one of Britain’s frequently encountered coastal plants. You are likely to find it in mud flats, on the banks of estuaries and even growing among the crags on a rocky shore, but you won’t see it in sand dune habitats. In rare circumstances you might find some sea plantain growing alongside roads that are frequently salted.

Sea plantain is a known attraction of coastal insects and other pollinators. Some caterpillar species feed on the juicy leaves.

The salt marshes it often frequents are often areas of conservation, so check your laws before you harvest.

Always consider the abundance of the plant in a particular area – if you find some sea plantain on an exposed rock, it’s better to leave it alone as that plant needs all the energy it can get.

Never strip a whole clump – just cut a few leaf spears away with a sharp blade to allow the rest of the plant to regenerate. It is a perennial plant, and will keep coming back, so take care of your patch. The best time to gather leaves is May – July, but they are edible and not very bitter throughout its growing season. The seeds ripen August-September, and if harvesting these make sure to leave plenty for the plant to propagate itself.

Sea Arrow Grass often grows alongside the sea plantain, but its leaves are much narrower and more threadlike, with a much coarser flower structure. Look up some images in your books and online so that you know what you’re looking for. Sea Arrow Grass is also edible so if you do confuse the two don’t worry too much.

Other Plantains – these are edible too so don’t panic 🙂

Like the land borne plantain species, sea plantain has a very particular mushroomy flavour, to all accounts because of endomycorrhizal fungi that colonise the plant’s roots – and probably help it to live in a highly salty/rocky/wet environment! This makes it perfect for mushroom risottos, quiches, tortillas, pies and so on. Its succulence also makes it very nice to eat raw in salads or as a lightly steamed vegetable side dish with lemon and olive oil.

The seeds are edible in much the same way as ribwort plantain seeds are similar to psyllium husk. They could be harvested, dried and toasted for sprinkling on salads or soups or incorporated into crackers and granolas.

This plantain species has a reputation as a bulk laxative because of its succulence, indicating high mucilage content. You would need to consume quite a lot of it to get this effect, but consuming food quantities is a great way to take it as a tonic for the digestion.

This recipe was envisioned by a good friend of mine, Fergus Drennan, when thinking up new ways to in…

This Japanese Knotweed Syrup has a flavour similar to rhubarb syrup; it can be used for making knotw…