Berries in food, bark in medicine.

A woody perennial shrub that can grow to 4m in height.

The leaves, 5–10cm long, grow up the stem oppositely. They have three-lobes with serrated edges. A layer of fine hairs can be found on the underside. The leaves are green in spring, changing to orange-yellow or red in autumn. I always think they look a little like sycamore leaves.

The flower grow in large clusters and are a creamy-white colour, although I do sometimes find them being pink.

Each cluster of small flowers is encircled by a ring of much larger flowers.

The fruit is bright red, round and growing in bunches sometimes they look like someone has dipped them in syrup as they are very sticky.

Found in British hedgerows and at field borders, in wetlands and on riverbanks. Sometimes it has been planted as a decorative plant in public parks and green areas. Its bark is slightly warty and gnarled and looks quite similar to Elder, with which it shares a botanical family. The leaves are broad, with three main lobes which makes them look a bit like dinosaur feet. They turn red in the autumn. The flowers are white to off-white and umbel-like, with a centre of small blossoms that are ringed on the outside by larger flowers (this is a key differentiator between Gudler Roses and Elder). The flowers also blossom later and can be seen in June and July. The berries are very distinctive, being bright red and slightly translucent when ripe.

This is a commonly encountered plant in Britain and there are no concerns about its conservation status currently.

The bark should be harvested in the early spring before the buds start to form. Cut branches away from the main body of the shrub and peel the bark off with a small knife. Do not peel the bark away directly because this leaves the rest of the plant open to infection.

The bright crimson berries are ready to be picked when they have gone slightly translucent. They can be harvested generously, but ensure that there are some left for the plant to reproduce and for certain birds like bullfinches and migrating Waxwings to eat.

The dinosaur foot leaves are a key feature and will help you to keep it separate from Elder, which has similar flower heads. However, the flower heads of Guelder Rose have larger florets around the outside of the umbel-like structure which are a slightly lighter colour than the smaller, inner blooms. Elder flowers are uniform.

When harvesting berries, ensure that the berries you are picking are from the shrub itself rather than any vines that may also have red berries, such as woody nightshade which is highly toxic.

As with Elder, the leaves of Guelder Rose contain compounds that can be toxic to the mitochondria. Large amounts of the berries eaten raw can lead to vomiting in some individuals. Freezing and cooking reduces this effect, and they are not toxic.

The berries are used as a native substitute to cranberries and can be added to jams, syrups, puddings, mousse or sorbet. The flavour is decidedly bitter and tangy, which can feel very unusual to the modern palate. Persevere with it, because bitter is excellent for digestion and at the very least these berries could make it into a wild cocktail mix. 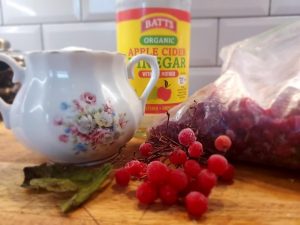 The bark is prized for use in pain, particularly the pain caused by spasming muscles such as menstrual cramps. Other spasmic conditions like hiccoughs, nervous stomach ache and tension headaches can be eased by its sedative, antispasmodic actions.

The larger external flowers are sterile and the fruits are technically known as drupes.

Here’s what eat weeds are saying