How to Identify Hedge Garlic

The first part of the name, Alliaria, means “resembling an Allium”, which is reference to its garlic-like scent. Petiolata means “with a leaf stalk”

People who suffer from hypothyroidism are advised against excessive consumption of members of the brassica family. Hedge garlic is a brassica

Honesty (Lunaria annua), before either, is in flower, but this is also edible. After flowering, Honesty has purple flowers, whereas Hedge Garlic has white flowers (it’s also edible)

Native to Europe, Africa, and Asia. Listed as an invasive species in North America

Hedgerows, woodland edges, around fence posts, gateways, in fact anywhere where it can get a bit of support

Hedge garlic is a biennial plant. In its first year, it has kidney-shaped toothed leaves. 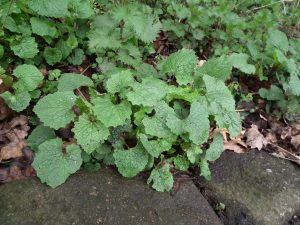 In its second year, the leaves become more heart-shaped but remain toothed. 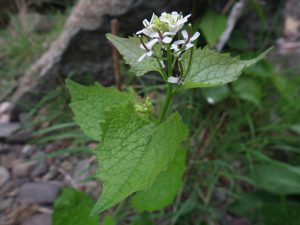 It throws up a flower stalk with a cluster of white four-petalled flowers at the top. 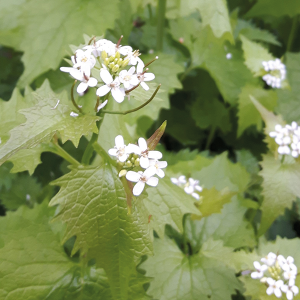 It has long thin seed pods, very standard for plants within the mustard family, when squeezed small seeds are held within the pod. 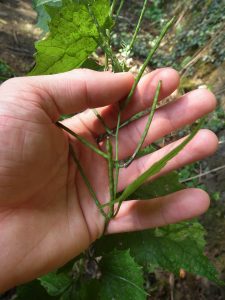 The leaves have a mild garlic odour when they are crushed.

When it comes to the common names of plants, “Jack” is often used as a term of reference for the Devil – Devil-by-the-Hedge.

The leaves and flowers can be used raw in salads, or lightly steamed. Some people get a strong unpleasant taste on chewing the leaves, however, a good dressing usually solves that.

After hedge Garlic has flowered, the seeds can be used as a mustard-flavoured spice or seasoning. They can also be used to make a rustic wholegrain mustard

Hedge garlic contains mustard oil glycosides and has been used in the treatment of asthma, eczema, and skin irritation. Chewing the leaves is believed to relieve mouth ulcers. If you have a medical complaint, please visit your doctor.

This plant has very few natural consumers. Two species of weevil are being considered as a possible control method in the USA, where it is classed as a non-native invasive. Hedge garlic is believed to have anti-bacterial and anti-fungal properties, meaning it is resistant to biological attack in the soil.

The leaves contain a small amount of cyanide, not enough to damage a human, but enough to kill insects that may attempt to eat it

Black Bryony / Summer / Toxic A toxic member of the Yam family, it’s quite a common sight in summer …