An easy to identify member of the Gooseberry family with edible fruits. It’s a medium-sized shrub, growing up to 1.5m tall.

The leaves are palmate, with 3-5 lobes and they are bluntly toothed. Their upper surface is hairless, the undersides is hairy. The leaves smell strongly of Blackcurrants when they are crushed. 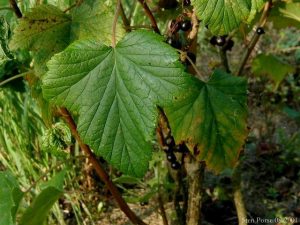 The flowers are quite unremarkable, they are small, reddish to green in colour and grow on hanging racemes, called strigs. Each strigs may have up to 20 flowers. The flowers open in succession from the base upwards. The plant normally flowers between April and May.

The flowers develop into dark purple to black, shiny berries. Up to 20 berries grow on each racemes causing them to droop down. Individually the berries are about 10mm in diameter. The berries normally appear from July to August. An established bush can produce up to 10kg of fruit per year!

Blackcurrants are a non-native species, originally they come from Sweden and Norway. They are found in the wild in the UK but they are less common than Redcurrants (Ribes rubrum). Most often we find them in damp woodlands, hedgerows and river banks where they have naturalised.

The Guelder Rose (Viburnum opulus) could also look similar, typically Guelder Rose is a larger plant, its berries grow in bunches rather than on racemes. Guelder Rose berries has a strange smell a bit like a wet dog. The berries are edible but they need to be cooked first.

They can be eaten raw or cooked, they have a lovely sharp flavour that we are all familiar with. They are high in pectin so are great for jams and jellies. Their flavour works well in savoury dishes too.

Beverages are often made from the berries for example, Crème de cassis, a French Blackcurrant liquor that’s typically serve with champagne to make a Kir Royale.

We are all familiar with Ribena, the blackcurrant cordial. 95% of the Blackcurrants grown commercially in the UK go into this drink. Ribena was launched in 1938 and because blackcurrants have a high vitamin C content, free Ribena was given to children during the Second World War when fruit such as oranges became hard to get.

All parts of the plant have been used traditionally in herbal medicine.

The leaves have antimicrobial, anti-inflammatory, antiviral, antiseptic and anticancer properties. They make a really tasty and health tea.

Blackcurrants have been used a lot in the past in the textile industry, a yellow dye is obtained from the leaves and a black or purple dye from the berries.

more from the foundation of this fruit

what are the medicinal uses?

This risotto recipe is full flavoured, creamy and delicious. The best thing about this recipe is tha…

HOW TO IDENTIFY FIR, SPRUCE, AND PINE TREES Fir, Spruce, and Pine make fine wild edibles if you know…

You can use a vast range of wild greens instead of spinach in Saag Aloo, however my favourite by far…