Redcurrant is an easy to identify member of the Gooseberry family with edible fruits.

The leaves are palmate, with 3-5 lobes and they are bluntly toothed. They grow spirally around the woody stems.

The flowers are quite unremarkable, they are small, yellow to green in colour and grow on hanging racemes. The plant normally flowers between April and May. 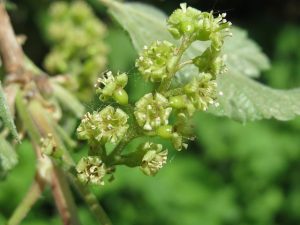 The flowers develop into bright red, translucent berries. Up to 20 berries grow on each racemes causing them to droop down. Individually the berries are about 10mm in diameter and they have vertical lines running down them at bit like the lines of longitude on a globe. The berries normally appear from July to August.

Redcurrant is a non-native species but it does appear often as a garden escapee, most often we find them in woodland clearing, hedgerows and river banks where they have naturalised.

The Guelder Rose (Viburnum opulus) could also look similar, typically Guelder Rose is a larger plant, its berries grow in bunches rather than on racemes. Guelder Rose berries are edible but they need to be cooked first.

The berries are famed in the UK for Redcurrant jelly typically served with lamb or game. But their tart flavour works well in jams, jellies and syrups.

In Scandinavia they are used to make fruit soups and summer puddings.

In Austria they are added to ‘Linzer torte’ a traditional tart served at Christmas and in Russia they are made into Kissell a sweet, healthy drink.

Redcurrants are a great source of antioxidants such as vitamin C and manganese. These protect the body from the effects of oxidative stress and may help strengthen the immune system and ward off diseases.

They have a long history of use in herbal medicine for example tea made from dried leaves is said to ease the symptoms of gout and rheumatism, be useful in compresses for wounds, and as a gargling solution for mouth infections.

They have been proven to be effective in treating certain skin ailments including eczema and acne. Redcurrants also helps purify blood and enhance the texture of the skin and they are including in many commercial face creams and masks as they firm up tired skin.

Redcurrant have been used a lot in the past in the textile industry, a yellow dye is obtained from the leaves and a black dye from the berries.

what’s paul kirtley saying on them

more on the health benefits

5 of the most toxic berries found in the UK