Very similar in appearance to the Common Puffball (Lycoperdon Perlatum) but they tend to be darker in colour especially as they age.

Most often found in coniferous woodlands but they also appear in the grass and sometimes in sand dunes, they prefer acidic soils.

No real cap. The fruit body is usually round or pear-shaped with a small foot or stem. The surface is covered in tiny almost back pyramid-shaped ‘pearls’, which when rubbed off leave a dark net-like pattern. The surface is off white when young darkening with age, they will develop a darker central umbo when they have reached maturity. The flesh when young is almost pure white and spongy, as they mature this will turn to a yellow/green colour as the spores develop.

The stem is similar in colour to the fruiting body and is also covered in the ‘pearls’. More like an inverted cone than a true stem.

They give off an unpleasant almost gassy smell when they are cut.

For this species I would remove the tough outer skin using a sharp knife before cooking them.

Like many other members of the family they don’t have the strongest flavour so they are probably best mixed with other stronger tasting mushrooms.

My favourite way to eat them is to cut them into bite sized pieces, dip them into flour, egg and then breadcrumbs and deep fry them as a vegan friendly ‘chicken nugget’ alternative.

Ignore any that have begun to turn yellow, green or brown as they will be unpleasant to eat. As you more familiar with them you’ll soon be able to ID them without cutting them all in half.

Unlike nearly all other members of the Puffball family there are some concerns around edibility. Some sources class them as a good edible others list them as mildly toxic.

The spines or ‘pearl’ like structures on the surface have been known to cause lung irritation when inhaled, so I tend to brush these off while I’m picking them. 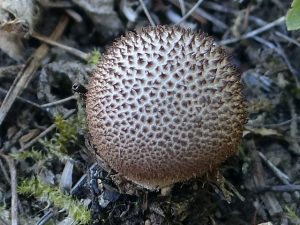 Other members of the Lycopodium family, all are edible as long as they are still, pure white in the middle.

Death caps (Amanita Phalloides) but these lacks the ‘pearl’ structures on the surface and when cut in half you will see an immature mushroom ready to burst free.

The Common Earthball (Scleroderma Citrinum) they tend to be firmer in texture and when cut in half you will see a mass of purple/black spores.

The Common Stinkhorn (Phallus Impudicus) can also like similar when they are young, these lack the spiny surface and when cut in half will reveal the ‘witches eye’ rather than being pure white.

The genus name Lycoperdon translates to ‘wolfs flatulence’ this is due to the way their spores are dispersed. As they age a small hole will develop on the top of the fruiting body and then when an animal or raindrop touches the fungus a large cloud of spores is released.

Common Inkcap / All Year Round / Toxic Description  An easy to identify mushroom, they are very comm…