Oak Moss / All Year Round / Edible

Growth primarily on the trunks and branches of oak trees. It is pale, sagey green in colour, and branches out from the base – which is known in lichens as being fruticose. It will tend to grow only 3-4cm in length. It is highly branched, and may appear similar in appearance to Reindeer moss and Old Man’s Beard, however a key difference is that the thallus (the bits that grow outward) is flat and straplike, not round. 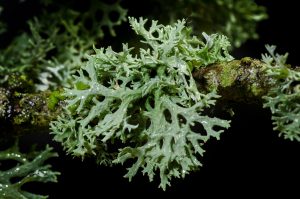 Consider whether you really need to harvest lichen. Ideally choose not to unless it is enormously abundant. This lichen grows 3 to 11 mm each year, meaning that what can be harvested in a couple of seconds may have taken a decade to form.

Cut only the tips of the thallus away, giving the rest of the lichen the best chance of regeneration and your best chance of not mixing a lot of dirt into your meal.

It may appear similar in appearance to Reindeer moss and Old Man’s Beard, however a key difference is that the thallus (the bits that grow outward) is flat and straplike, not round.

It is known from its use in the perfume industry that people with particularly sensitive skin should avoid direct contact with Oak moss extracts, but this may be ameliorated by the lichen being in its whole form.

Prepare [any] lichens before eating. They contain acids (which help them live off rock and wood) which can cause gastric upset.

Don’t be too put off by this – lichens have been used as food and medicine as long as there have been people. It’s just necessary to do the proper preparation. This involves either steeping the lichen in several batches of water (discard the water after each soak) – adding bicarbonate of soda helps to leach acids because it is alkaline – or simmering the lichen for 15 minutes (other recipes say that 5 minutes is plenty), discarding the water and repeating. Once soaked, the lichen can be dried and used as a spice or thickening agent.

Oakmoss has been a source of acids used in medicine for its antimicrobial properties.

Oak moss contains some secondary metabolites that are used in the perfume industry, leading to its mass harvesting in France. It is also considered a biomonitor species for pollution, particularly the accumulation of heavy metals.