Dandelion is one of the UK’s most prolific weeds and most of us have spent some time digging this one up out of the garden, kicking and swearing at it. But if we look at it slightly differently it could help us with cutting our food bills.

Dandelion root tea is sometimes taken to increase people’s appetite, what it also does is release sugar into the blood, so as a diabetic it is worth keeping this in mind if you’re planning to drink dandelion root tea.

Here’s a guide on how to make dandelion root coffee

Or you can buy it here

Those with very sensitive skin may get contact dermatitis when touching the latex (but it’s also good for killing off warts!)

Could be confused with…

Dandelions also look very similar to Cat’s Ears (Hypochaeris radicata), the main differences being that dandelion leaves are smooth or glabrous whereas Cat’s Ears are coarsely hairy, although the whole of a Cat’s Ear plant is also edible, and the leaves are actually less bitter than those of the dandelion.

Dandelions are the most prolific of all weeds throughout the UK, and can also be found all over America, Canada and throughout Europe and Asia.

Everywhere and anywhere it can get its seeds to spread, including road sides, grassy banks, walls, cracks in paths, fields, hedgerows, gardens, waste lands and much more.

The dandelion is an extremely effective perennial, having the ability to grow from seed and root segment. A single plant can produce up to 5,000 seeds, which have the ability to travel in the wind over 200 metres from their origin. They also do not need to be pollinated to reproduce. Dandelions grow above a sturdy taproot that can grow over 30cm down, forming a basal rosette of deeply lobed leaves.

The leaves can grow from 5-50cms long and 2-10cms wide, the leaf can vary slightly from one to another but all leaves are typically oblong or obovate in shape becoming more narrow towards the base of the plant. The leaf edge ranges from being shallow to deeply lobed but they are allays lobed in some way, giving them the appearance of lions’ teeth. 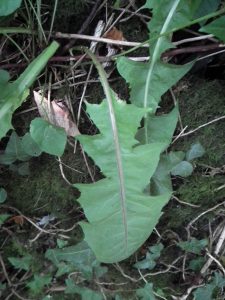 A single flower head grows from a single, hollow leafless stem that can grow up to 50cms and on breaking exudes a white latex. The yellow flowers grow from a single centre and resemble an opened traditional Japanese umbrella. 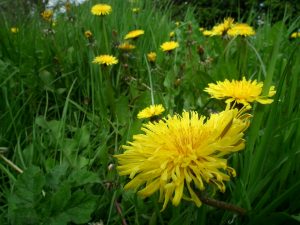 This umbrella eventually becomes a white puffball of seeds, which can easily be carried for dispersal by the wind.

Root: If collected late autumn this can be roasted for coffee substitute or syrup. Tender roots are suitable for grating and lacto fermenting, or roasted or boiled with Marmite (vegemite).
Stem: use as a straw for drinking chilled dandelion flower tea, cordial or wine.

Leaves: fresh and early growth in spring can be used in salads, pasta dough, as a vegetable, for tisane, juicing, lacto-fermenting, pesto, a bitter for cocktails and beer making.

Closed flower bud: (before going in to seed) as a vegetable.

Dandelion is mainly used as a liver tonic and diuretic. The white juice exuding from the stem is said to cure warts. Dandelion was, historically, known for treating a large array of ailments due to the large number of active compounds present within the whole plant.

In order to decrease some of the bitterness sometimes present in the leaf, you can rip the two leaf edges away from the centre, removing the majority of the white liquid causing the bitter taste. If you place a pot with a small hole in it over a young dandelion it will grow a large pale leaf which will be a lot less bitter, more tender and delicate as a salad, restaurants actually buy this stuff, it’s like forcing rhubarb.

Dandelions that grow in the shade tend to have the largest and best edible leaves, whereas dandelions growing in full sun produce the most amazing flowers. Just before picking the dandelions, give the flower a sharp flick to knock away any potential bugs that may be resting in there.

Nettle, Sea Kale and Sea Spinach/beet, chorizo & rice This is a fantastic, fresh and filling rec…