Young leaves become visible in April and you may find a bit of fresh growth until October. Rely on your sense of good, healthy, fresh-looking foliage.

Mainly salt marshes, mudflats and estuary banks – any similar-looking varieties growing in-land or as part of ornamental gardens will lack the succulent leaf texture that the plant developed to chemically protect itself from incredibly high salt concentrations. It has been reported to grow in rocky coastal areas in some cases.

Native to northern Europe, its range extends throughout the British Isles, down through Europe to northern Africa and central Asia.

Take note of the conservation status of the salt marsh you happen to be visiting with foraging in mind. Many have special designations, and it is against the law and good conservation practice to forage from these places. They are a valuable source of nectar to some species of butterfly that frequent the coast.

Also, be aware of sources of heavy metals and other contaminants that can accumulate in coastal plants like this.

Gather Sea Aster with respect and consideration for the plant and the other creatures that rely on it and its locality. 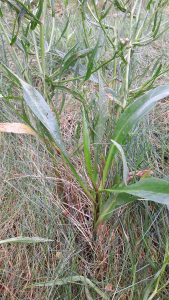 With fleshy, spear-shaped leaves that grow from a basal rosette. 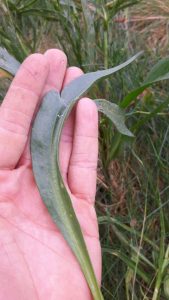 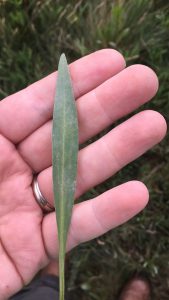 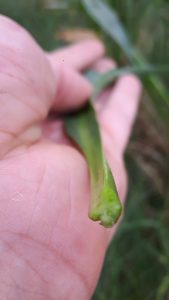 Its flowers are like spiky daisies, with yellow centres and outer petals ranging from purply white to full-blown lilac. It blooms from June/July to September. 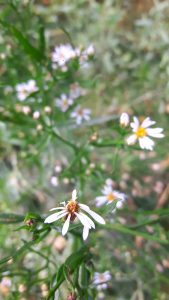 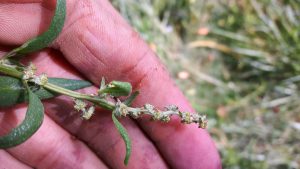 Michaelmas daisy flowers are similarly coloured, but these bloom in September, whereas Sea Aster is out earlier in the year from about June to October. Sea Lavender leaves can be similar in shape, and is another edible, but the taste is not as good.

The leaves are the main culinary event – other parts lack the same satisfying, salty crunch and mild flavour.

They make an excellent addition to salads, pickles, pestos (be careful about the higher water content of the succulent leaves if you intend to store the pesto for a few weeks or months – you could try wilting the leaves for a day to let some of the moisture evaporate), but are extremely well suited to fish dishes including sushi rolls, perhaps built with some foraged laver, hottentot fig and rock samphire.

Sea Aster leaves fall into the category of ‘somewhere between a herb and a vegetable’ that defines so many wild edibles. Its flavours are very complementary, but you might not want to use the same quantities as spinach.

Dishes like quiche, frittata, risotto, layered bakes and pies are well set-off by the salty tang of Sea Aster leaves.

Being a coastal plant that needs to deal with extremely high salt concentrations, Sea Aster tissue is full of minerals that provide a chemical buffer. Eating wild foods, particularly coastal ones, on a regular basis is a great way to keep levels of minerals like magnesium, calcium, iron, potassium and iodine at your body’s optimum. Due to a high mineral content, it will keep your immune system working in good order.

Traditionally it was used topically as a cooling agent for burns, cuts and scalds, and internally for fevers and lung disorders. It also had an association with good eyesight.

John Gerard, a medieval herbalist, named it ‘tripolium’ from the Greek tri-polis – three citizens – possibly in memory of Hippocrates, Galen and Dioscorides

Scots Pine / All Year Round / Edible Identification Guide for Scots Pine A tall, evergreen tree (up …