Native to the temperate regions, from Scandinavia to the Mediterranean, and from the British Isles through Russia, and the Middle East to India, China, Taiwan and Japan.

It is naturalized almost everywhere and is usually found in disturbed areas, especially in soil rich in nitrogen. It is commonly cultivated in Japan where it gives its name to a particular construction technique, burdock piling.

Greater burdock is a biennial plant, rather tall, reaching as much as 3 m. Burdock is an example of a despised weed that gives us generous and powerful food and medicine. Its long taproot grows deep into the earth, pulling up nutrients to create medicine that herbalists use for chronic or deep illnesses. The burrs, which are a bane of ranchers, farmers, and animal owners, protect the powerful seeds that are strong acting against acute infections.

In the first year’s growth, it develops large simple basal leaves that grow near to the ground. It produces a long taproot that is pithy white in the center and covered in a thin brown skin. Burdock root is best harvested in the fall of the first year of growth. Because burdock likes to grow in compact soils and the roots go deep into the earth, harvesting the wild root can be quite challenging.

In the second year, it forms a central flower stalk that can grow from 3 to 6 feet tall. The flower is a purple thistle-like flower that then develops into a structure containing small hard fruits, commonly, but technically incorrectly, called seeds. After the fruits are developed, the individual plant dies. No need to grab your tissues, however, as it has assuredly done a good job of reproducing for the next generation. Those dried burrs quickly grab onto anything they come in contact with, whether it’s animal fur or your favorite jacket. They burrow in and hitch a ride to spread their seeds far and wide. Burdock burrs may have been the inspiration for Velcro®.

Burdock will grow in pretty much any type of soil.

Large, alternating, cordiform leaves that have a long petiole and are pubescent on the underside. 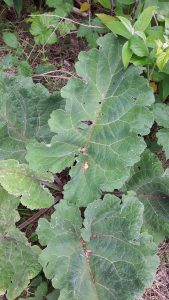 The flowers are purple and grouped in globular capitula, united in clusters. They appear in mid-summer, from July to September. The capitula are surrounded by an involucre made out of many bracts, each curving to form a hook, allowing them to be carried long distances on the fur of animals.

The fruits are achenes; they are long, compressed, with short pappus hairs. These are a potential hazard for humans, horses, and dogs. The minute, sharply-pointed, bristly pappus hairs easily detach from the top of the achenes and are carried by the slightest breeze – attaching to skin, mucous membranes, and eyes where they can cause severe dermal irritation, possible respiratory manifestations, and ophthalmia. 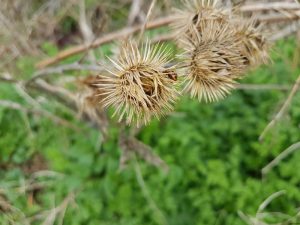 Root – raw or cooked. Very young roots can be eaten raw, but older roots are normally cooked. They can be up to 120cm long and 2.5cm wide at the top, but are best harvested when no more than 60cm long. Old and very long roots are apt to become woody at the core. Young roots have a mild flavour, but this becomes stronger as the root gets older. The root is white but discolours rapidly when exposed to the air. Roots can be dried for later use. They contain about 2.5% protein, 0.14% fat, 14.5% carbohydrate, 1.17% ash. The root contains about 45% inulin[240]. Inulin is a starch that cannot be digested by the human body, and thus passes straight through the digestive system. In some people this starch will cause fermentation in the gut, resulting in wind. Inulin can be converted into a sweetener that is suitable for diabetics to eat.

Young stalks and branches – raw or cooked. Used like asparagus or spinach. They taste best if the rind is removed. The leaf stalks can be parboiled and used as a substitute for globe artichokes.

The pith of the flowering stem can be eaten raw in salads, boiled or made into confections. A delicate vegetable, somewhat like asparagus in flavour.

The seeds can be sprouted and used like bean sprouts.

Greater burdock root is known as niúbàng (牛蒡) in Chinese, which was borrowed into Japanese as gobō and Korean as ueong (우엉), and is widely eaten in the region. It was used in Europe during the Middle Ages as a vegetable, but now it is rarely used except in Italy, Brazil and Portugal, where it is known as bardana or “garduna”. Plants are cultivated for their slender roots, which can grow about 1 meter long and 2 cm across. The root was traditionally used in Britain as a flavouring in the herbal drink dandelion and burdock, which is still commercially produced.

Immature flower stalks may also be harvested in late spring before flowers appear. The taste resembles that of artichoke, to which the burdock is related.

In the second half of the 20th century, burdock achieved international recognition for its culinary use due to the increasing popularity of the macrobiotic diet, which advocates its consumption. The root contains a fair amount of dietary fiber (GDF, 6g per 100g), calcium, potassium, amino acids, and is low calorie. It contains polyphenols that cause darkened surface and muddy harshness by the formation of tannin-iron complexes. Those polyphenols are caffeoylquinic acid derivatives.

The root is very crisp and has a sweet, mild, and pungent flavor with a little muddy harshness that can be reduced by soaking julienned/shredded roots in water for five to ten minutes. The harshness shows excellent harmonization with pork in miso soup (tonjiru) and takikomi gohan (a Japanese-style pilaf).

A popular Japanese dish is kinpira gobō, julienned or shredded burdock root and carrot, braised with soy sauce, sugar, mirin and/or sake, and sesame oil. Another is burdock makizushi, rolled sushi filled with pickled burdock root; the burdock root is often artificially colored orange to resemble a carrot. Burdock root can also be found as a fried snack food similar in taste and texture to potato chips and is occasionally used as an ingredient in tempura dishes.

Fermentation of the root by Aspergillus oryzae is also used for making miso and rice wine in Japanese cuisine.

Burdock is one of the foremost detoxifying herbs in both Chinese and Western herbal medicine. The dried root of one year old plants is the official herb, but the leaves and fruits can also be used. It is used to treat conditions caused by an ‘overload’ of toxins, such as throat and other infections, boils, rashes and other skin problems. The root is thought to be particularly good at helping to eliminate heavy metals from the body. The plant is also part of a North American formula called essiac which is a popular treatment for cancer. Its effectiveness has never been reliably proven or disproven since controlled studies have not been carried out. The other herbs included in the formula are Rumex acetosella, Ulmus rubra and Rheum palmatum. The plant is antibacterial, antifungal, carminative.

It has soothing, mucilaginous properties and is said to be one of the most certain cures for many types of skin diseases, burns, bruises, etc. It is used in the treatment of herpes, eczema, acne, impetigo, ringworm, boils, bites, etc. The plant can be taken internally as an infusion or used externally as a wash. Use with caution. The roots of one-year-old plants are harvested in mid-summer and dried. They are alterative, aperient, blood purifier, cholagogue, depurative, diaphoretic, diuretic, and stomachic.

The seed is alterative, antiphlogistic, depurative, diaphoretic, and diuretic. Recent research has shown that seed extracts lower blood sugar levels. The seed is harvested in the summer and dried for later use. The crushed seed is poulticed onto bruises.

The leaves are poulticed onto burns, ulcers, and sores.

Care should be taken if harvesting the seed in any quantity since tiny hairs from the seeds can be inhaled and these are toxic. Can cause allergic reactions. Contraindicated during pregnancy.

It is in flower from Jul to September, and the seeds ripen from Sep to October. Roots should be harvested in the autumn of the first year or spring/summer of the second year of this biennial, before it send up its flower stalk. During the first year, burdock’s large leaves collect energy and store it in the root, ready to use that energy for the flower stalk the following year.

Spindle / Summer / Autumn / Toxic Spindle is a fairly common shrub or small tree, one of the indicto…

Wood Avens, Spring, Summer, Autumn, Winter, Edible Wood Avens are one of those plants we walk over a…