Docks / All Year Round / Edible

A common and familiar wild plant. Well known as a cure for nettle stings but it is also edible. There are two main species found in the UK, Broad-leaved Dock (Rumex obtusifolius) and Curled Dock (Rumex crispus) both have a similar taste and can be used in the same way. They are perennial and considered invasive in many parts of the world.

The leaves grow from a central rosette, they are oblong to spear-shaped, smooth and have rounded bases. Deep green in colour, lower and more mature leaves often develop a reddish tinge. As the name suggests Curled Dock has wavy, curled edges to its leaves. Up to 30cm long. 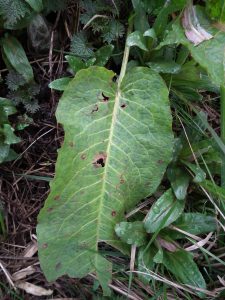 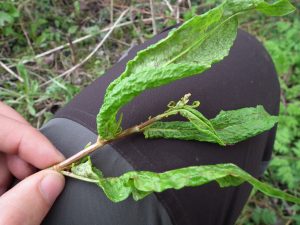 The flowers grow at the top of a tough, reddish stem. They consist of large clusters of racemes that contains small greenish flowers that change to red as they mature. The flower spikes often persist over winter. 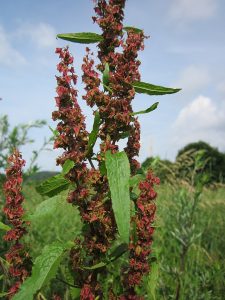 The seeds are papery and dry, when mature they are reddish-brown in colour. 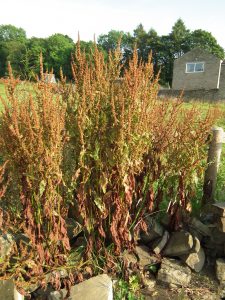 It’s a very common plant that will grow almost anywhere.

Both plants are high in oxalic acid, which can be toxic in excessive quantities. It has also been known to trigger hay fever and asthma in some people.

Most of us are familiar with Dock, but its leaves can look a little like Burdock (Arctium lappa) and Foxglove (Digitalis purpurea). Burdock leaves are matt and hairy, they also tend to be wider. The flowers and seeds are quite different too, but they are also edible although a little bitter.

Foxglove is a plant that you wouldn’t want to eat, again its leaves are matt and hairy. They tend to be more pointed and when in flower looks very different.

All parts of the part are edible and it has been used as food or medicine for centuries. The leaves and shoots have a sharp, lemony flavour similar to Sorrel. They can be used raw in salads or cooked as a leafy green as a spinach alternative.

The dried and powdered leaves make a nice seasoning for fish and seafood.

The stems are nice to nibble on a walk or they can be chopped, stewed and used as a rhubarb alternative.

The seeds can be boiled as a porridge style dish or dried and ground, they can be used as a gluten-free flour.

The fresh leaves were used to wrap and preserve butter.

After the plant has flowered the leaves and too tough and bitter to use.

Docks are very nutritious. Curled Dock, for example, contains more vitamin C than oranges and more vitamin A than carrots. It also contains vitamins B1 and B2, and iron.

They have been used as a treatment for nettles stings for centuries but there is little evidence to back this up, many feel it is just a placebo.

In traditional herbal medicine, they are used as a remedy for staunching bleeding or for purifying the blood.

The juice from the leaves can be applied as a compress to heal bruises.

The seeds have been used to treat coughs, colds and bronchitis, and the roots are used as a remedy for jaundice, liver problems, skin ailments, boils, rheumatism, constipation and diarrhoea.

Broad Leaved Dock can produce around 60,000 seeds a year and they can survive for up to 50 years in soil due to a ‘chemical that inhibits microbial decay.

In the UK it is designated an “injurious weed” under the UK Weeds Act 1959. Injurious to the yield of arable crops not to human health.

Nettle, Sea Kale and Sea Spinach/beet, chorizo & rice This is a fantastic, fresh and filling rec…

Identifying trees in Winter is hard. It isn’t too bad in Spring, Summer and Autumn; But during…