Everything you need to safely identify the edible and medicinal Cleavers or Sticky Weed (Gallium Aparine) before heading out to forage some.

The species is native to a wide region of Europe, North Africa and Asia from Britain and the Canary Islands to Japan. It is now naturalized throughout most of the United States, Canada, Mexico, Central America, South America, Australia, New Zealand, some oceanic islands and scattered locations in Africa. Whether it is native to North America is a question of some debate, but it is considered to be native there in most literature. It is considered a noxious weed in many places.

Cleavers are annuals with creeping straggling stems which branch and grow along the ground and over other plants. They attach themselves with the small hooked hairs which grow out of the stems and leaves. The stems can reach up to three feet or longer, and are angular or square shaped.

The leaves are simple, narrowly oblanceolate to linear, and borne in whorls of six to eight. 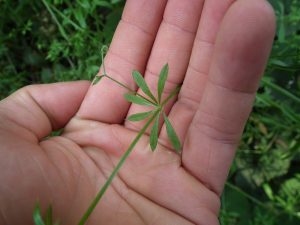 Cleavers have tiny, star-shaped, white to greenish flowers, which emerge from early spring to summer. The flowers are clustered in groups of two or three and are borne out of the leaf axils.

The globular fruits are burrs that grow one to three seeds clustered together; they are covered with hooked hairs which cling to animal fur, aiding in seed dispersal.

Galium aparine is edible. The leaves and stems of the plant can be cooked as a leaf vegetable if gathered before the fruits appear. They make a useful addition to vegetable soups. It is said that using this plant as a vegetable has a slimming effect on the body. However, the numerous small hooks which cover the plant and give it its clinging nature can make it less palatable if eaten raw. Cleavers are in the same family as coffee. The fruits of cleavers have often been dried and roasted, and then used as a coffee substitute that contains less caffeine – Although considering the effort required to gather enough fruit, it may not be worth the effort.

A decoction of the whole dried plant gives a drink equal to tea.

Goosegrass has a long history of domestic medicinal use and is also used widely by modern herbalists. A valuable diuretic, it is often taken to treat skin problems such as seborrhoea, eczema and psoriasis, and as a general detoxifying agent in serious illnesses such as cancer. The whole plant, excluding the root, is alterative, antiphlogistic, aperient, astringent, depurative, diaphoretic, diuretic, febrifuge, tonic and vulnerary. It is harvested in May and June as it comes into flower and can be used fresh or dried for later use. It is used both internally and externally in the treatment of a wide range of ailments, including as a poultice for wounds, ulcers, and many other skin problems, and as a decoction for insomnia and cases where a strong diuretic is beneficial. It has been shown to benefit in the treatment of glandular fever, ME, tonsillitis, hepatitis, cystitis, etc.

The plant is often used as part of a spring tonic drink with other herbs. A tea made from the plant has traditionally been used internally and externally in the treatment of cancer. One report says that it is better to use a juice of the plant rather than tea. The effectiveness of this treatment has never been proved or disproved.

A number of species in this genus contain asperuloside, a substance that produces coumarin and gives the scent of new-mown hay as the plant dries. Asperuloside can be converted into prostaglandins (hormone-like compounds that stimulate the uterus and affect blood vessels), making the genus of great interest to the pharmaceutical industry. A homeopathic remedy has been made from the plant.

Poultices and washes made from cleavers were traditionally used to treat a variety of skin ailments, light wounds and burns. As a pulp, it has been used to relieve poisonous bites and stings. To make a poultice, the entire plant is used, and applied directly to the affected area. Cleavers is also used as a lymphatic system aid, as it assists the lymph nodes in cleaning out toxins. Making tea with dried leaves is most common. It can be brewed hot or cold. For a cold infusion, steep in water and refrigerate for 24–48 hours.

Click here for our making herbal remedies at home guide

In Europe, the dried, matted foliage of the plant was once used to stuff mattresses. Several of the bedstraws were used for this purpose because the clinging hairs cause the branches to stick together, which enables the mattress filling to maintain a uniform thickness. The roots of cleavers can be used to make a permanent red dye.

Leaves are best harvested in the spring. It is in flower from Jun to August, and the seeds ripen from Aug to September.

You’re unlikely to confuse cleavers with anything other than another Galium, all of which are pretty safe to eat.

Galium odoratum, known as sweet woodruff, is toxic in large doses but is used medicinally and as a herbal flavoring in smaller amounts. Sweet woodruff grows in Europe, parts of Asia and has become naturalized in Canada and the Northern USA. Sweet woodruff has different shaped leaves, the stem branches at leaf whorls, and the flowers are clustered at the top/end of the stems, instead of nestled within the leaf whorls.

Galium is Dioscorides’ name for the plant. It is derived from the Greek word for ‘milk’ because the flowers of Galium verum were used to curdle milk in cheese making. Aparine is a name used by Theophrastus for goosegrass. It is derived from Greek and means ‘clinging’ or ‘seizing’.

A red dye is obtained from a decoction of the root. When ingested it can dye the bones red.

The dried plant is used as a tinder.

The plant can be rubbed on the hands to remove pitch (tar).

More on the health benefits

words and imagery from @foraged.by.fern instagram In my opinion, there’s no better activity than mak…

Fig Leaf Cookies This is a nice, simple and delicious way to use the leaves from a fig tree to get a…