Spruce / All year round / Edible

The needles are stiff and sharp and grow individually, around the stem, they have a triangular or square cross section. 0.5cm -2cm long. Each needles is individually attached to the tree and they can be easily rolled between your fingers. On the upside they have two parallel silver lines.

The bark is thin when the tree is young, but it gradually grows thicker with age. As the tree matures the bark thickens into grey-brown flaky scales.

The cones of Norway spruce are the largest of all spruce species. The tree produces both male and female cones in order to reproduce. The male cones are small and reddish and can be found clustered around stems. The female cones are 10-15 cm long, elongated and oval in shape, and are green-purple in colour. They tend to be a lot more flexible than pine cones.

Other conifers, the main one to be concerned about is Yew (Taxus baccata). Yew has flat needles that are pretty much odour less when crushed and Yew lacks the silver lines on the underside of the leaves.

Here we have a nice blog post about the differences between conifers.

Yes, you can eat your Christmas tree!!!

Although the flavour comes from the essential oils within the needles and after a month in a warm living room most of these oils will have evaporated so you’re best finding one in the woods.

I like the young tips finely chopped and added to salads.

They also a great addition to cures for meat and fish.

The flavour also works well in deserts, I blend a large handful of the needles with caster sugar and use this in shortbread recipes. 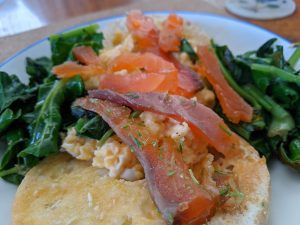 The needles are high in Vitamin C and the young tips are used by herbalists to soothe dry, tickly coughs. The shoots contain a volatile oil that is rich in terpenes which have antiseptic, mucolytic and antibacterial properties.

The resin of spruce was used in the manufacture of pitch, a very important product before the wide spread use a petrochemicals.

The wood is used a lot to make soundboards for many musical instruments, including guitars, mandolins, cellos, violins.

How many types of spruce are there?

Some more from the American conifer society