Chamomile A once common plant but due to habitat loss it is classed as vulnerable on the Vascular Plant Red Data List for Great Britain. We would therefore not recommend harvesting it in the wild.

The leaves are small, 2 times pinnate, finely divided and downy to touch. They have an apple like aroma when they are crushed.

The flowers grow at the top of a green, hairy stem that is around 20 cm tall. They look like daisy flowers with yellow disc florets and white ray florets. Around 2-3 cm in diameter. 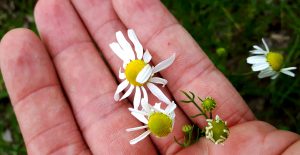 It’s a grassland plant and can be found in meadows, cliff edges. It was planted in lawns in Elizabethan times but can be hard to find in the wild.

Chamomile is likely unsafe for use during pregnancy, and its topical use for skin disorders may cause contact dermatitis.

The closely related German chamomile (Matricaria chamomilla) which can be used in the same way.

Pineapple Weed (Matricaria discoidea) also looks similar and it can be used in the same way as the Chamomile but the leaves have a pineapple like scent when they are crushed.

The plant has a long history of use as a flavouring for food, herbal teas and cosmetics.

The fresh leaves added to a salad bring a nice fruity flavour.

The fresh or dried flowers can be used to make your own teas, simply steep them in boiling water for 5 minutes.

The plant is used by a few craft brewers as a flavouring.

The plant has been used in traditional medicine since the Middle Ages and is classed as a carminative, painkiller, diuretic and digestive aid. It is also used as a mild laxative and has an anti-inflammatory and bactericidal effects.

The main constituents of chamomile flowers are polyphenol compounds, including apigenin, quercetin, patuletin, and luteolin, and preliminary research shows that it may have anti-anxiety properties.

As I said due to habitat loss and changes to land use it’s getting harder and harder to find Chamomile, instead use Pineapple Weed, it’s more common, has a lovely aroma and can be used in the same way.

From the Wildlife Trust