How to Identify The Porcini

The temperate woodlands across Europe, including Britain, from Scandanavia south and east to Spain, right across Eurasia and China. Closely related species are found in North America, and Boletus Edulis has also been found in parks in New Zealand, probably introduced along with european trees. It likes established woodland, growing mycorhizal relationships with particularly oak, beech and pine species.

Boletus Edulis is a very chunky mushroom, with a spongy pore surface under the cap, growin to 8-30 cm across and 10-30cm tall.

Identifying Features of the Porcini:

The cap is a medium brown, 8-30cm across, looking a bit like like a bread roll, hence the English name Penny Bun. It should be smooth, with a white line around the edge. *if the cap has any scales or roughness in texture, its not a porcini.

Stem  – creamy white, usually very bulbous and often wider than the cap in young mushrooms. The surefire feature to look for is a slightly raised white-on-brown net pattern, called reticulation,around the upper half. If the reticulation is brown on white, you might have found a Bitter Bolete instead – but don’t worry, these aren’t dangerous , they just don’t taste very nice!

If you cut into the mushroom, it should be cream all the way through, with white to yellowish tubes in the spongy section. *If theres any red or blue staining, its definitely not a porcini and might cause an upset stomach. Looks cool though! You won’t come to harm just by touching it and having a closer look.

Underneath looks like a sponge, with hundreds of tiny pores. These are white in young specimens, turning greenish-yellow as the mushroom matures. *If the mushroom has gills like a supermarket mushroom rather than these spongy pores, its no bolete and you’re looking at the wrong family all together. Still interesting, but not a Porcini

*The crucial features here are that along with the spongy pores under the cap, edible boletes have no ring on the stem. so if you see one, or it looks like the mushroom has emerged from a bag or egg structure, best leave it be. 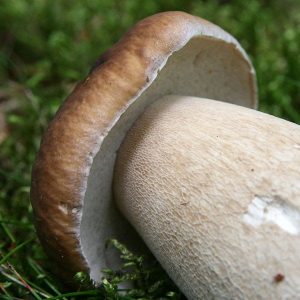 Smell – pleasant, savoury mushroom smell. Sometimes you can catch the scent even before you see them! They give this extra flavour and scent to anything you cook with them

In food  – they taste amazing! It has a strong mushroom flavour with undertones of nuttiness; it can simply make a simple dish like a risotto or pasta something Extra. They can be dried for longer storage, which intensifies the flavour

While studies have found extracts of porcini to have some anti-inflammatory and cancer cell killing effects in the lab, these haven’t yet been developed into effective medicines. The main use is simply its nutritional value – like many mushrooms it is a good source of protein, minerals and B vitamins.

Appears in late summer, often after a drop in temperature or rain after a heatwave. look for them Auguat- November

As mentioned above, these are most often confused with the Bitter Bolete, Tylopilus felleus. These aren’t dangerous, but taste awful! other brown boletes such as Pine Bolete boletus pinophilus, Dark Cep Boletus aureus, or Summer cep Boletus reticulatus are also similar, but much nicer to eat. As long as you avoid any bolete that has red or blue staining on it, the potential lookalikes are all safe.